by Louise Challiss
in Arboriculture, Woodland Management, and Machinery & Mechanics
on 18 Aug 2021

Over his 18 years of working in the arb sector, Oliver Husar admits to having used more makes and models of chipper than he cares to remember! He also admits that his previous experience of using a chipper from GreenMech had left him slightly underwhelmed… Nevertheless, his interest was sparked by GreenMech's latest EVO series and, after seeing the powerful performance and major improvements in build quality at a recent dealer open event, an EVO 165D now proudly sits as the sole chipper on his fleet. 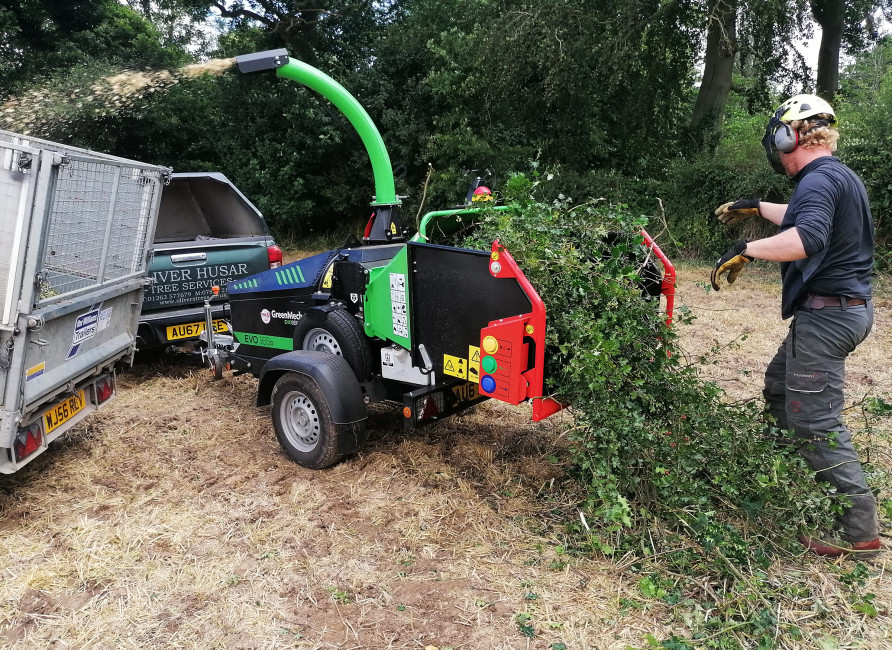 Carrying out all aspects of hedge and tree work for both domestic and commercial customers in and around North Norfolk, Oliver set up Oliver Husar Tree Services seven years ago. "I've used all types and sizes of chipper, and when our previous machine began to struggle with costly age-related issues, it was once again time to look at what options were out there. I had read about the EVO series from GreenMech and was invited to a demonstration event with local dealer TNS which I attended with an open mind, but admittedly low expectations - I'm delighted to say I was proved wrong!"

"When you're comparing 6" machines, arguably the most critical element is the feed rollers - if you haven't got the power, the grip and pull, the machine is useless. This is noticeably where GreenMech have massively upped their game. Today, for example, we've been processing hawthorns which are notoriously tricky to feed in being fine and bulky, but it's been absolutely no issue for the EVO 165D."

GreenMech's EVO series has been designed in direct response to industry demands to deliver more aggressive torque, more powerful bite and more throughput. The 165D features a 25hp Kubota diesel engine, twin horizontal rollers and unparalleled processing power via the new, heavy-duty flywheel. Together with improved performance, the aspects of safety, durability and ease of maintenance have also been front of mind in its design.

"We had a look at the petrol version of the EVO 165 which packed some serious punch for its size however, as I'm not restricted to sub 750kg for towing, I went for the diesel model. The unit's strength and build quality really impressed me and the size of the infeed hopper was a big plus." Oliver adds, "The back-up and support I've had from TNS since the delivery in July this year has been great too - the whole process from the machine itself, to the advice has been really positive."