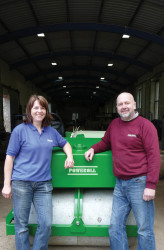 With, what used to be, the tallest chimney in Cornwall within its boundary, the home of Poweroll has an interesting history.

The site was previously a brick works, the home of pre-cast concrete cattle feeders, chicken houses and even a boat builders.

Trevor and Shirley Luckhurst's paths have crossed ever since their respective mums used to run a fruit and veg shop in the small town of Callington in Cornwall, before they were born. They even went to the same school, albeit a couple of years apart. So, perhaps it was fate that formed their partnership, although it is unlikely they ever dreamt that, some years later, they would be making cricket rollers together!

Both are natives of Cornwall. Shirley is from Redruth, deep in the heart of the county, and Trevor from Callington, just on the Cornwall side of the Tamar river. In truth, he was born in Tavistock, but that was purely for postnatal reasons!

Trevor joined Brown & Phillott Ltd. in 1980, making precision engineering items for local manufacturers. The site is [what you would now term] a small industrial estate on the outskirts of the village of Gunnislake. Its hilltop position affords great views across Dartmoor. 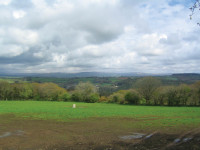 When the then owner of Brown & Phillott was diagnosed with cancer, Trevor was offered the opportunity to purchase the company and, so, in 1987, just one year after getting married and both in their mid-twenties, he and Shirley found themselves owning and running a company whose client list was in decline due to customer closures and downsizing. Staff totalled, including themselves, just four, working out of a collection of Cornish stone buildings dating back to 1870 that were in need of repair.

The site had previously been a brick works - a deep and overgrown hole in the ground outside is the only reminder of its existence. Pre-cast concrete cattle feeders, chicken houses and even boats have been built here, whilst a huge industrial chimney on the site was used for taking away the fumes from an adjoining arsenic factory!

This structure used to be the tallest chimney in Cornwall, and even a Dakota DC3 flying into it on a foggy night during World War II did nothing other than remove some stonework halfway up. It was the storms of the late eighties that eventually reduced its stature, a lightning strike removing the top third. 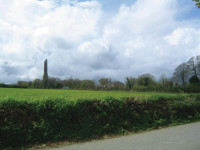 "I live just two miles away and I heard the strike that brought it down. It was around six o'clock in the morning and was like a bomb going off," recalls Trevor. "God knows what the chap living in the caravan in the neighbouring field thought though!"

Fortunately, no one was injured, and the chimney now stands as a reminder of the industrial past of the site, whilst the stone buildings have new roofs, and purpose built offices have been added to accommodate the requirements of a modern business. Here, a glass cabinet displays a range of precision tooled components charting the company's history.

As we sit in Trevor's new office, we are joined by Shirley, who has removed her overalls, to chart how the couple came to be making cricket rollers in rural Cornwall and, I suspect, to ensure that 'Trevor gets it right'!

"We continued to manufacture precision components for the next five years and then, in 1992, by a stroke of luck - as you do - picked up the contract to make scrum machines for locally based Rhino Rugby, which meant that we had to branch out into fabrication. That proved to be a turning point."

Fortunately, the new work was not too much of a departure from previous experience, as Trevor's father had, for twenty-three years, operated a manufacturing business from the same industrial estate, supplying farmers in the locality with galvanised steel farm gates and other fabricated equipment used by them, throughout 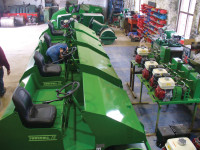 the 1960s and 70s. Trevor learnt some of his metal fabrication skills during this period, working for his father during school holidays and on Saturdays.

With fabrication now part of the company's services, and the company name changed to Power Precision and Fabrication Ltd., Trevor heard, on the grapevine, that Callington Cricket Club had recently purchased a new roller. "I had no real idea what I was getting into, but thought the machine they had purchased seemed archaic and might be a product that we could investigate with a potential to manufacture ourselves!"

"By looking at some other models on the market, both cricket and road rollers, I realised that they were fairly straightforward to manufacture, and just about within our capabilities. One thing that I incorporated into the design, right from the outset, was hydraulic drive, as it was clear that some of the existing models were very awkward to operate."

"I remember going to a Business Link meeting in the early days of Poweroll, where I was told that a manufacturing company like ours had no chance of going it alone making products for the grass care industry and would have to market rollers through a major manufacturer," recalls Trevor.

In 1997, Trevor delivered his first ever roller to a cricket club in Yorkshire. "In 1998, we doubled our sales," says Trevor, with a wry smile. " 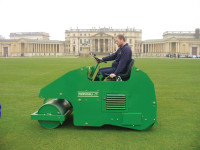 During this period, the company continued to manufacture the precision engineered items and the scrum machines, and all of it on the back of little or no promotion. "I've got no marketing skills, basically, I am just a machinist," says Trevor in his soft Cornish accent. "Roller sales came either by word of mouth, occasional magazine advertising or from attending Saltex, a show I have exhibited at since 1998.

The company manufacture six models, from the pedestrian Poweroll 5, used by bowling and tennis clubs, and in increasing numbers for cricket practice nets and artificial wickets, up to the four or five feet wide Poweroll County which, as its name implies, is used by professional clubs and particularly on extensive school and college grounds where there are large areas of ground to roll. 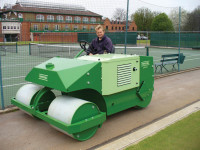 "We are happy to build specials," says Trevor. "For example, The Queen's Club requested a six feet wide machine with split front roller. That particular model goes against convention, but was a configuration the club were used to and felt comfortable with."

As you might expect, the factory area is a hive of activity, with metal welding and milling machines; several lathes, - one large enough to machine the outside of the roller drums. What comes across when talking to the couple is 'build quality'. "We make everything here on site," says Trevor. "We use high quality components throughout, including of course the engines - Honda petrol, Kubota or Hatz diesel engines are utilised."

"Operator comfort is also very important. If someone is spending a large amount of time on their roller, it's crucial that it should be comfortable and easy to use. All our new models have water ballast facilities to enable the machine to be the optimum weight for the ground conditions, and are really easy to ballast. Every roller has a rounded edge to avoid any creasing, and they are all machined, after fabrication, to guarantee that the rolling surface will run true without flat spots or be egg shaped." 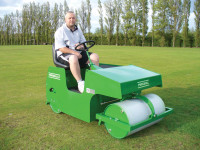 Outside the factory sit a number of machines that have been taken in part exchange. Poweroll offer refurbished 'pre-loved' machines but, as Trevor explains, many clubs are now seeing the sense in purchasing a new machine, with ease of use benefits, rather than updating what he refers to as 'out-of-date' models. "Certainly, the grants that have been available, over recent years, have made buying a new machine a viable option, regardless of the size of the club. I see far too many clubs who take the 'cheap' option of buying an old road roller, only to find that, because of their original operational requirements, are full of whistles and bells that cricket rollers don't have or need. When they go wrong, they can be very expensive or, as often as not, uneconomical to repair."

I ask how many rollers the company now sell in a year? "I can't possibly tell you that, not because I don't know, but because we don't wish to divulge that figure!" I try another tack. Trevor smiles back; "persistent, aren't you!"

"What I can tell you is that, as well as The Queen's Club, Derbyshire and Hampshire County Cricket Clubs are amongst our clients. The All England Tennis Club at Wimbledon have ten machines. This year alone we have dispatched four machines to Cricket Kenya, funded by the ICC (International Cricket Council), and machines to Canada, The Netherlands, India, Australia and Barbados. In total, we currently export to around sixteen countries - mostly, of course, ex-colonial, although I have been surprised by how many cricket grounds there are in the middle-east. "Our most obscure sale, though, has been to a model aeroplane club in Karachi. It's used on a twelve acre site for rolling out runways!"

Now employing ten full-time staff and one part-time admin assistant, the company still manufacture precision components, and the scrum machines, although Trevor is aware that the market for those is now, pretty much, saturated. The rollers are now a considerable part of the success of the business, and it is refreshing to see that, in these economically difficult times, a British manufacturer is bucking the trend. Not bad for 'just a machinist'!