You will be more impressed with a grass's performance in the middle of winter than how fast it jumped out of the ground outside the playing season!

Poa Pratensis, Kentucky blue grass or Smooth stalked meadow grass, it's all the same thing. It's a species which is neglected and underrated in its role within natural sports surfaces. So, let's take a look at the characteristic and virtues of this grass species.

Poa is Greek for fodder, and traditionally formed a valuable natural pasture plant for animal grazing on well drained fertile soils. Farmers used to refer to it as sweet grass. In our industry, the prospect of animals grazing on the eighteenth green or goalmouth of a Premier league pitch would send shivers down the spine, although I have come across 'animal' maintenance during my career but, hopefully, we've moved on from that!

The name Kentucky bluegrass derives from the unmistakable blue flowering seed heads which form if the plant is allowed to grow to its full maturity height of 30 to 70cm. For this reason, Kentucky is known as Bluegrass Country but, in the world of manicured lawns, this phenomenum is rarely seen by the average American. In the UK also, you will rarely, if ever, see the waving blue heads in the summer breeze. Only in commercial seed production can you see this.

Poa pratensis has a creeping root system in the form of rhizomes. These are roots which grow laterally, just below the soil surface, and form new shoots away from the main plant. This characteristic enables the species to colonise areas and compete with other species. This lateral root system is, therefore, ideal for binding soil structure together, which is why it is such an attractive component for turf producers who require a well knitted turf that does not fall apart during lifting. This rhizomatous growth habit also enables the plant to be particularly drought tolerant.

So, that's what is going on under the ground. What about its growth on the surface? 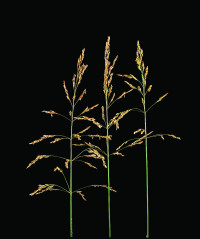 Generally, plants in natural environments grow 30-70 centimetres tall. The leaves have boat-shaped tips, narrowly-linear, up to 20 centimetres long and 3-5 millimetres broad, smooth or slightly roughened, with a rounded to truncated ligule 1-2 millimetres long. The conical panicle is 5-20 centimetres long, with 3 to 5 branches in the basal whorls; the oval spikelets are 3-6 millimetres long with 2 to 5 florets, and are purplish-green or grey. They are in flower from May to July, compared to Annual Meadow grass (Poa annua) which, as we all know, is in flower for eight months of the year.

So, how did a grass used for animal fodder become used as a turf grass?

It was traditionally used as a lawn grass in the States, and its use became more extensive in the 1950s when it was recognised for its worth in sporting venues from racecourses to baseball stadiums. The New York Yankee stadium has used a 3 way Poa pratensis blend since the 1960s. In fact, 27 out of 30 major league clubs use natural pitches and Minnesota, who were on artificial, are converting back to natural turf, so it speaks for itself. Even when we look at European countries, there is a wider use of Poa pratensis, particularly in the Scandinavian countries where the species features more prominently in the football turf market.

Now for a lesson in the 'Birds and the Bees', but there's no sex involved in this explanation

The breeding of good quality varieties is not such an easy task as with other species. Poa pratensis is described as apomictic, which means there is no sexual reproduction involved in producing a seed head. An apomictic plant produces seed which is genetically identical to the parent plant. Basically, a clone. The fundamental problem with this is that the lack of variation makes the breeding of new material very difficult. The majority of varieties found in the market place are natural eco-type collections. A further difficulty is the appearance of mature plants. The broadest leaved and most robust plants can be the very ones that fine down to produce a compact turf under management, so their early potential is not so easy to identify.

Our interest in Poa pratensis as turf managers is about how well it will perform for a given use and within certain environmental conditions. It has been a recognised grass species for many years in other countries, but somewhat limited in its use in the United Kingdom. Only around 3% of all the grass seed used for amenity purposes in the UK is Poa pratensis. The majority of that will be used in the domestic lawn market, either as part of seed mixtures or grown as a component of commercial turf production.

Why are UK turf managers so reluctant to use Poa pratensis? 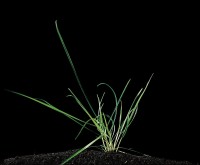 ne of the most frustrating and illogical reasons is down to cost. It is true that the species is more expensive, weight for weight, compared with many other commonly used species. For every gramme, there are approximately 3000 seeds of Poa pratensis compared with 1000 for Perennial ryegrass (Lolium perenne). It simply does cost more to produce, especially if it is to be free of our old friend, annual meadow grass.

Price is not a justified reason to reject a species that offers such tremendous turf qualities. Turf managers who are currently managing Poa pratensis dominated swards will tell you that it is more wear tolerant, winter hardy, drought resistant and capable of self repair than a perennial ryegrass turf.

One of the major drawbacks of Poa pratensis is its relatively slow germinations, and subsequent ability to compete against other species in the sward during the establishment period. It grows best at a pH of about 6.5, but will tolerate a pH range of 4.5-8.5. It can tolerate a temperature range of 43 to -44°C, with an optimal growth occurring between 16 and 32°C. Studies have shown that it is necessary to expose fresh seed to a moist chilling of 5 to 15°C for 10 to 14 days to break dormancy before germination occurs. However, other studies indicate that the seed is no longer dormant 6 months after harvest.

Alternating temperatures seem to be more efficient than continuous temperatures in breaking dormancy. It is also understood that seed exposed to continuous light can have its germination inhibited; therefore it is recommended that seed is buried in the seedbed between 0.5-1cm.

There is some merit in seed priming to improve germination times, although there are practical implication as seed suppliers cannot prime large quantities in advance of receiving orders, due to viability problems if the seed remains unused. Primed seed needs to be used immediately after priming for best results.

The most beneficial pre-sowing treatment is matric priming for 4 days at 20°C, which results in faster germination than osmotic priming or seed soaking treatments. It is important to note that priming will not compensate for lack of moisture, low temperatures and poor seedbed preparation.

Typically, seed mixtures can contain 100% Poa pratensis in warmer climates. In our climate a good balance is 50:50 Poa Pratensis to Perennial ryegrass. This gives a 75% seed number inclusion in favour of the Poa pratensis, leading to less competition from the perennial ryegrass during the establishment phase.

Sowing in late summer/early autumn is the preferred time, although late spring renovation programmes can achieve equally good takes. Where practical, sow the Poa pratensis separately, approximately 10 days prior to the perennial ryegrass, so that seeding emergence is occurring around the same time. 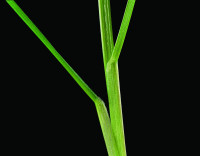 Choose your cultivars according to use as, normally, there is a split in performance between those that are suited to high wear against those for lawns and closer mowing. Also, select those cultivars that have good rust resistance, which is a disease that is becoming far more prevalent in the UK, particularly in southern counties.

Your persistence in establishing Poa pratensis will be reward with a natural sports surface, which is not only harder wearing than perennial ryegrass but also more shade tolerant. The rhizomatous root system provides a natural netting affect, which not only gives players good grip but also prevents loss of ground cover.

I will leave you with one last thought. We are led to believe that the faster a seed germinates, the better it is. You will be more impressed with a grass's performance in the middle of winter than how fast it jumped out of the ground outside the playing season!