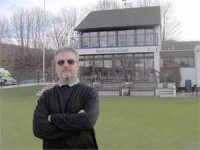 Light rolling with the heavy mower, Allett, began on Monday 21st February and promptly stopped on the 22nd. Winter came at last. We did not have much snow to talk of, but we did suffer icy winds and hard overnight frosts.

Rolling recommenced on the afternoon of Monday 6th March, with one pass of the Allett. Another frost during the Monday night was slow to thaw on the Tuesday, so we left well alone until the Wednesday morning when the un-ballasted Auto-Roller was taken to the square. One pass at an angle across the square was achieved. On Thursday we achieved another pass in the opposite angle and on the Friday we carried out one pass across the line of play. Already the square is feeling quite firm. I might add that the practice area has been treated in exactly the same manner.

As I write this article, the weekend has stayed dry and the forecast suggests mainly a dry week, warming up as the week progresses, so there is a very good chance that we shall ballast the roller first thing on Monday morning and follow a routine of cross rolling once a day. By the end of the week we may have achieved as much consolidation as we can, which will be just as well, because with attendance at the I.O.G. conference next week and Easter the following week end, there will not be a lot of time left before we face our first game on the 16th April.

We have followed a very similar programme of rolling on our second ground, which, unlike our main ground, about the lowest spot in Bath, is almost alongside the Bath race course, just about as high as you can get.

There are occasions when attending this ground when it feels more like being in the Arctic, and the wind chill factor is something else. This site is wonderful for my assistant to learn his apprenticeship. If he can stick that, then he will be able to cope with anything, hence the rolling programme is a couple of days behind the main ground.

There are few hard and fast rules when it comes to spring rolling. The make up of each ground will be different and the equipment available will vary, so one must do what works for them, although I do not believe that doing nothing is an option. You will only get out what you are prepared to put in.

Two basic rules that I abide by are, do not roll when wet, wait until the surface is just damp, and do not be in too much of a hurry to put the heaviest roller available on the square too soon. My gut feelings tell me that better results are obtained by adopting a practice of little and often, rather than one mad bash. However, science is looking into this rolling lark, and it may prove me to be wrong. Should this be the case, then I shall attempt to alter my practices, but most of us will still have to be ruled by gut feeling, because I cannot see many of us having access to the measuring devices that will be required for us to get it scientifically correct. I really do hope that I am not wrong.

Happy rolling and a good 2005 season to you all.