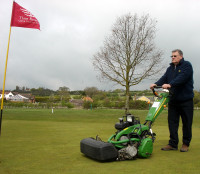 Arnold Phipps-Jones is the course manager at Three Rivers Golf and Country Club in the village of Cold Norton. He bought three of John Deere's new 220E hybrid electric mowers for the greens on the club's Kings and Jubilee courses, having first seen them at the BTME show in Harrogate.

The Kings is a near 50-year old course with push-up soil greens, while the Jubilee was built just 12 years ago with sandy USGA specification greens. The idea was to switch to alternating between ride-on 2500A triplex mowers and hand mowing on all 36 greens.

"It's the fast height of cut adjustment that really scores," says Arnold. "The fact that it's a single fix that guarantees parallel alignment saves a lot of time and trouble, and removes uncertainty and human error altogether. A five-minute demo from the dealer was all we needed, and all the staff can do it very easily now.

"It takes accuracy to a whole new level and the mowers are unfailingly precise, even on the Jubilee's undulating greens," he adds. The mower's floating head design is particularly effective for close contour following in these conditions.

Arnold, who is also BIGGA's South East Region Board Director, has a once a week greens cutting policy - it's nearly always on a Friday, as he believes it's important that the greens look their best at the weekend. All six full-time greenkeepers, including Arnold, have to do six greens each; unfailingly, it's 'job done' for each of them in less than two hours.

Bought from local Essex dealer P Tuckwell Ltd, the 220Es have also proved very economical thanks to the electric drive on the cutting cylinders. He says he and his team of six full-time plus two part-time greenkeepers can cut 15 or 16 greens on a single tank of fuel. 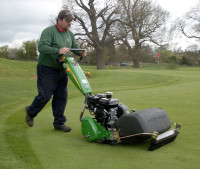 Just 30 miles or so away in the north of the county at Colne Valley Golf Club, owner Tom Smith took delivery this spring of three new John Deere 220SL walk-behind greens mowers, also from Tuckwells. Tom is more than just a hands-on owner; he has been a greenkeeper for 20 years, and before moving into ownership worked on the course at Merrist Wood College. He too is very much involved in BIGGA, being its South East Chairman.

Since he bought the proprietary club 11 years ago, it had been his practice to hand cut the greens. John Deere's previous 220C models had done the job well for the last five, but it was time to upgrade and Tom also made his choice at BTME in Harrogate.

He and his four greenkeepers liked the look of John Deere's 220SL Precision Cut mowers better than anything else on the market. These models feature a fixed head version of the patented SpeedLink system. The new SLs at Colne Valley are also fitted with a brush attachment to help present the grass for cutting.

"The C Series mowers had done a great job for us and the new SLs seemed like a continuation of the solid precision we had come to expect, but with important refinements to give us still more benefits," says Tom. "I'm confident that the accuracy and quality of cut of these new machines will see the greens look and play at their best.

"I like the challenge of setting up the whole course, but the greens are the icing on the cake," he adds. "Nothing makes you feel better as a greenkeeper than when a player compliments you on the state of your greens."