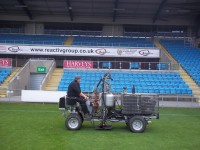 The Shay Stadium is home to both Halifax Town F.C., who currently reside in the Blue Square Premier North Division and also Halifax RLFC in the Rugby League Championship. The stadium is located within the Borough of Calderdale, and is owned and run by the council. As Stadium Manager, Mike Murray faced a recent problem with waterlogging caused by drainage issues. As the season had already started, the need to secure the right solution for both the short and the long term was paramount. In discussions with Terrain Aeration Services, Mike learnt of the excellent experience that leading turf guru Alan Ferguson had enjoyed when utilizing the Terralift concept during his days as Head Groundsman for Ipswich Town F.C.

Grounds Maintenance advisor for the IOG, Rodney Heyhoe is also secretary at Lightcliffe Cricket Club in Yorkshire and also confirmed to Mike that this was indeed, the likely solution. The glowing endorsement by Alan Ferguson coupled with the fantastic results that the cricket square had seen, the decision to employ the Terralift probing system at the Shay Stadium was taken.

IMMEDIATE PLAY
A five day contract was undertaken between home games when the entire pitch was deeply aerated and played on the day following completion. The surface water drained and the surface was noticeably firmer once inspected on the Saturday. This is turn creates a healthier sward for the future with stronger root growth and less susceptible to scuffing. With the winter weather now upon us, Halifax Town will be able to play more games on their pitch now that the surface water is draining away more quickly. This in turn means less maintenance and a happier Stadium Manager.

Rod Heyhoe (Lightcliffe Cricket Club) had previously used the Terralift on his ground and was pleased with the results. Although it had now been many years since the work was undertaken, the ground remains well drained and fit for play.