by Matthew Campelli
in Football, Renovations & New Builds, and Rugby
on 18 Aug 2017 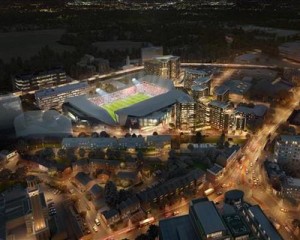 Brentford Football Club has revised plans for its new stadium, with the capacity set to decrease from 20,000 seats to 17,250.

The Championship team has altered the original plans - which was submitted to the London Borough of Hounslow in 2014 - to accommodate spectator and broadcast requirements for the Premier League and Premiership Rugby.

It is expected that when the stadium is complete, professional rugby club London Irish will groundshare with Brentford FC for a period.

Premium lounges will be able to accommodate 3,000 guests, and as part of the new proposal the Brentford FC Community Sports Trust will be located within the stadium itself.

As well as alterations to the stadium plans, construction partner Be (formerly Willmott Dixon Residential) will change its approach to the proposed surrounding residential development to give it a "more integrated sense of place".

Construction on the development will now begin in early 2018, with an expected completion date by early 2020.

Cliff Crown, Brentford FC chair, said: "I would like to thank the fans of Brentford FC for their support and patience during this last stage of detailed planning. I know that some fans may be concerned that the capacity of the stadium will be reduced but it is critical that this project is as financially robust and deliverable as possible.

"I am delighted that we are continuing to prepare for life in the Premier League with enhanced media, Outside broadcast and lighting facilities to make the stadium fully compliant from day one, with provision for safe standing as soon as legislation allows."