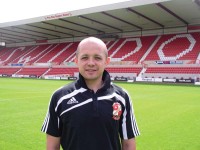 Swindon Town Football Club start this season with a new manager, new players and high hopes of improving its standing in the First Division. If there's any uncertainty in terms of the football, there will be none surrounding the performance of the pitch at the County Ground itself, the subject during the past two years of an extensive renovation and maintenance programme carried out by Ecosol Turfcare.

Historically, things hadn't been particularly rosy on the pitch front. The former club owners did not employ a full time groundsman or see the need for pitch renovation. Nor did they have much of a budget. Groundsman Marcus Cassidy worked for an external groundscare contractor and tended the pitch sporadically as Acting Head Groundsman. "Maintenance was minimal and so was the budget," Marcus recalls.

One of the first actions of CEO Nick Watkins and Chairman Andrew Fitton was to recruit Marcus as Head Groundsman on a full time, permanent basis. "They wanted a decent pitch and were prepared to support me financially to achieve that. What they actually had then was far from ideal. It was over-used from training sessions the previous year - not to mention rock concerts and other social events - it was compacted, poorly draining and full of meadow grass" says Marcus. The Directors' brief was simple, "We expect it to become one of the best grounds in the league." 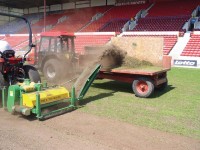 Ecosol Turfcare, who operate out of nearby Malmesbury, were asked to assess the pitch in March 2008 and provide a renovation specification that met the short and long term requirements of the Club. Bretton King, managing director, says, "The pitch was in a poor state and it was very clear that in-season work had been restricted, with compaction meter readings being particularly high. My proposal to the club addressed the problems and also mapped out a more rigorous year-round maintenance schedule. When we were then asked to do the work in the knowledge of the short close-season window, we reacted quickly and got things underway."

Says Nick Watkins, "Moving from outsourced maintenance to a fulltime groundsman, in tandem with Ecosol, has made a tremendous difference. We now apply fertiliser and fungicide materials far more appropriately and work on the pitch at precise times, not just at the convenience of our previous external contractor. Now into our second season, we have already seen another marked improvement in pitch quality over the first."

The first task, in May 2008, was to remove the top 20mm of the pitch with a Koro FTM and discard it, closely followed by a BLEC Sandmaster to open up pathways into the primary drainage system. Over 100 tonnes of dressing was then applied and incorporated into the surface, after which the pitch was re-seeded with British Seed Houses A20 Ryesport blend at 55gm./m.sq. 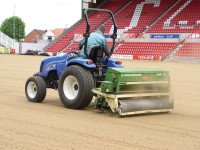 Despite the inclement weather, torrential rain and lack of sun, the sward soon re-established and Marcus and the directors were delighted. Within seven weeks the players trained on the pitch and the first pre-season friendly, against Portsmouth, took place in week eight, as planned.

"The pitch coped really well all season and the goalmouths didn't lose any grass until February," says Marcus. "Bretton and I put together a programme of fertilisation and aeration which had been absent in the past, and we did a lot of verti-draining so, consequently, it looked the best it had ever been and attracted positive comments from fans, management, our players and visiting clubs alike."

Nick adds, "Without exaggerating or underestimating them, Bretton and his team are very professional and understand the needs of the pitch very well." Last year, both local radio and television gave favourable coverage of the ground and the work done whilst, last season, The County Ground reached the last three in the FA Pitch of the Year list and was one of the favourites to win, before "politics" got in the way, and it was just pipped to the prize.

Unfortunately, the progress of the team was not quite as impressive, as Swindon Town only narrowly avoided relegation. Danny Wilson took over as the new manager mid-season and, with a solid budget behind him, he set to work to rebuild the squad and attract new players.

Full of optimism for the 2009/10 season, the club once again recruited Ecosol for end of season renovation in 2009. "We were impressed that the company took a long-term view," says Nick. "The pitch had come through a harsh winter and, at the end of April, it looked as good as it did at the beginning of the season. A good testament to the preparation work undertaken in the close season and the ongoing maintenance which was carried out throughout the playing season by Marcus."

The aim for 2009 was to build on 2008s improvements and address other specific issues, such as the small pitch depressions caused by pop concert equipment, and removal of Poa grass from the off-pitch perimeter which had been a constant source of contamination to the playing surface. 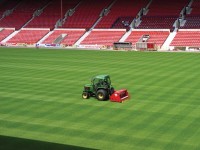 The three metre-wide perimeter was treated with glyphosate in late April to stop the already-forming seeds from getting into the playing area and adding to the seed-bank. Three weeks later the Koro FTM was again employed to remove just the surface vegetation (6-7mm) before further improvements were made to the drainage system. The depressions were then ameliorated with new dressing before the pitch was re-graded and levelled.

"With the passing of time, the pitch perimeter had become very undulating in places and couldn't be koroed properly, so we decided to kill-off the meadow grass on the sides and re-seed to stop it constantly encroaching," says Marcus, speaking in July, just days before the first match, an England v Denmark Ladies duel that is part of Swindon's FA contract. "That's really helped and it'll be easier to maintain the ryegrass now. We easily repaired the pitch after the training for this Ladies game and it's looking fantastic. We're expecting it to hold up well for the season." 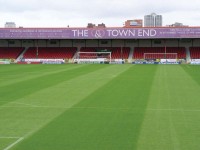 And that's just as well because fixtures come thick and fast. There are four games in ten days against Cardiff, West Bromwich Albion, Plymouth and the first League game against MK Dons on August 15th. Marcus will be maintaining it in-between with regular aeration, spiking at different depths to encourage root growth, and applying a sequence of feeds to retain the sward's health.

And for the future? Marcus concludes, "The pitch has a camber that runs from the Stratton Bank to the Town End and, although the sand slitting is doing a good job increasing the drainage rate, I'd like to look at Ecosol's Drill n Fill and a laser re-grading of the entire surface, if long term plans permit, to further improve the movement of water across and through the soil profile."

But the last word lies with CEO Nick Watkins, "The commitment and excellent work from Ecosol complements that of the good, permanent groundsman we have in Marcus, and together they are our recipe for success in continuing to improve the pitch."