0 Preparation for The Open Championship at Royal Portrush with Toro

On 18-21 July 2019, The Open makes an historic return to Northern Ireland for the first time in 68 years and bringing golf's oldest international Championship back again is Royal Portrush in County Antrim. As the club prepares to host the 148th event Toro is honoured to play a role in helping prepare the course. 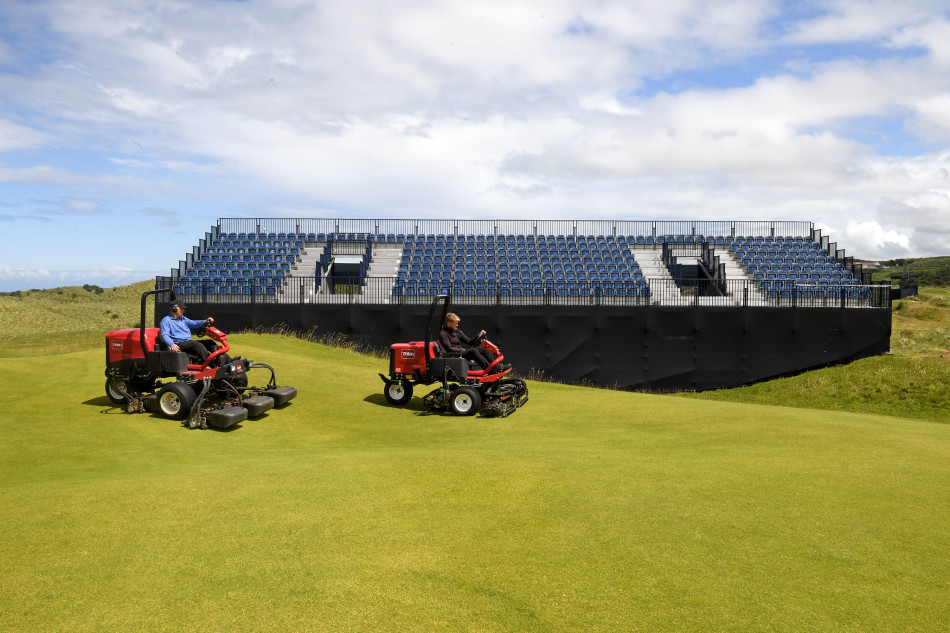 As expected, preparations for The Open are years in the making and Toro has not only been there every step of the way since the news broke in 2015 that Royal Portrush would be the 2019 host, but for the last 25 years.

Course manager, Graeme Beatt, who joined the club in 2014, comments: "The relationship between Royal Portrush and Toro is a quarter of century old and for us there is no better machinery partner to ensure the optimum conditions for the players as well as the eyes of the sporting world."

Preparing the all-important course, crews are using Toro's Flex 2120 pedestrian mowers for the greens, Reelmaster 3550-D and 3555-D mowers on the fairways, approaches and surrounds, Greensmaster 1000 and TriFlex 3400 on the tees, Reelmaster 3100-D with Sidewinder system on semi-roughs and Groundsmaster 4500-D on the roughs. In addition, the team uses the Greensmaster 3250-D and GR1000 on the practice area and the ProCore 648 for aerating the courses. 25 additional Toro machines from Reesink Turfcare, the sole Toro distributor in the UK for golf and sports fields equipment and irrigation products, have joined the 50-strong Toro fleet already at the club in the run-up to and during the Championship.

But it's not just a successful partnership with Toro machinery, Reesink and Lairds Grass Machinery that ensures the course will be tournament ready, but Toro irrigation too. In 2017, the irrigation system was upgraded to a Lynx central control system and Toro Infinity, Flex and B-Series sprinklers irrigate the rugged links course situated on the Atlantic coast.

"The location of the club is generally something of a challenge for an irrigation system, especially for the sprinklers," says Graeme. "It's quite a feat to deliver accurate spray in our unpredictable, windy and exposed conditions, but this has been no problem for Toro. We've been really impressed with the overall performance of the control system and sprinklers, but worthy of note are the B-Series sprinkler heads on the tees. They've really been put to the test and withstand all sorts."

Of course, it's not just an irrigation system that's new for The Open. The world-famous Dunluce course has been extended from 6,867 yards to just over 7,300 yards and every hole has had some work in varying degrees, none so much as the 17th and 18th holes which have become the tented village areas and two new holes created at seventh and eighth.

In fact, it's this last fact that's caused the only hiccup in the journey to being tournament-ready Graeme explains: "No Open Championship has ever sold out and when this one did, and in record time, the decision was made to release a further 15,000 tickets - that means we could have up to 230,000 spectators come through our gates! At that point we knew we needed to revisit the already established catering areas and extend them to accommodate this, which involved a lot of extra work. Let's just say the Toro Workman MDX-D and HDX utility vehicles were really put to the test over this time moving kit around the course and aiding the team in construction work!"

Doug Reid from Reesink, who has worked with Royal Portrush for almost half of its 25-year relationship, says: "Royal Portrush has been nothing but consistent in its machinery purchasing over the years, but as expected in the last five years things ramped up and some fundamental replacements and changes to the fleet took place. The biggest change was the switch from the four-wheel Reelmaster 6700-D to the three-wheel Reelmaster 3550-D for a lighter tread on the fairways. The RM3550-D also happens to be ideal for a links course.

"The way we work with Graeme and the team is a definite partnership, and we're glad that Toro remains the brand Royal Portrush has relied on for the last 25 years, and for its second Open Championship. Having the right equipment is vital in the preparation and performance for an event such as this, and we have worked closely with Royal Portrush to ensure all the tournament support needed from us is in place."

It takes a tremendous amount of teamwork and coordination to prepare for an international event but as Graeme says: "I feel lucky to have been chosen for the job; it's been such an honour to be involved. Probably the biggest achievement is that we've managed to do all the preparations we have with minimal disruption to our members. We've had their unwaivering support, and I'm sure that it will all be worth it to see their course presented on the world stage, challenging the world's best golfers for golf's greatest Championship!"