Groundsman Phil Redgwick is dreaming of Huddersfield Town playing in the Premier League on a pitch as perfect as he can make it.

The 61-year-old is overseeing the annual renovation of the John Smith's Stadium pitch which began this week with the removal of the top layer of grass along with about 80 tonnes of sand and soil which lies beneath.

After a fresh mix of sand-soil is put back on, the grass seed will be added.

It's the most nerve-racking time of the year for the experienced groundsman.

"This is the worst bit - the waiting on it growing again," he said on Monday as large scarifying machines removed the soil and sand.

"If we get the right weather, the grass will come through in eight days. We just need some sun."

This year there's added pressure as Town are on the brink of Premier League football. 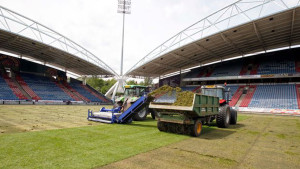 Phil, who watched his first Town game in 1964, recalls watching the Terriers crowned champions of Division 2 in the 1969-70 campaign.

Looking back on this season, he says the team has performed well - and he's proud of how the pitch coped.

"I thought it did very well considering the 52 games played on it," he added.

Phil Armitage, operations director at KSDL, the company that runs the stadium, said the pitch renovation work followed the same routine every year.

It would be playable for the next Giants home game and ready for football in six to eight weeks.

"This (renovation) is what they do at Premier League grounds. They have Desso (artificial grass, which makes up 3% of the playing surface) like we do. It gives the ground stability. The groundsman (Phil Redgwick) has a lot of pride in what he does and how he presents the field - we all have. We want to do the best."

He said the acquisition of extra 'growth light' rigs in March had improved the playing surface. 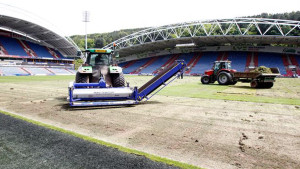 However, he said it was still a difficult task to provide a "totally flat surface" when different sports are being played on it.

"With the growth lights, it gives us the ability to keep a good surface all year round."

At present he has one eye on the play-off final and the other eye on the changes needed at the John Smith's Stadium should Town win promotion.

Proposed infrastructure changes to floodlights, TV gantries, media studios are in the pipeline, he says.

If Town do win, Mr Armitage says the eight weeks following the game will be hectic. He is too busy to attend the play-off final.

"I will be working at the John Smith's on Monday," he says.

"Everything is on hold until the result."