0 Preparing pitches in -4C is just not cricket 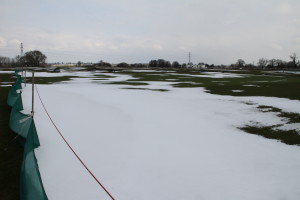 The new season is just weeks away, not that Lancashire's brave ground team would know it in this longest of winters.

Picture right is Allscott CC ravaged by the winter weather

A grubby Portakabin is plonked by the side of the nets. Inside, two small heaters do their best alongside a bumper bag of tea bags, a jar of hot chocolate, half gone, a pile of newspapers, a rack of spanners, a radio playing some cheesy tunes and six men slowly defrosting. This is the home of Lancashire's groundsmen, and their sanctuary during the bitterest winter in recent memory.

On a bright Monday lunchtime in March a pitiless east wind scoops the dust from the demolished hospitality stand onto the nets and chills cheeks in one breath. A ground sheet on the square that has not been pinned down has become squished like a swiss roll.

The funfair, setting up in the car park, a joke at spring's expense. It is 2C in theory but the wind-chill takes it down to minus 4C. This is professional sport at the raw end, the bonework in the half-light.

Matthew Merchant is Lancashire's chief groundsman. He started at Old Trafford in April 1990, aged 15, after a phone call from the then groundsman Pete Marron who drank at his parents' pub, The Quadrant. He took over in 2009 when Marron left.

He has seen most things - trailers of concrete on the outfield, builders cutting through the irrigation system, concert crowds churning the grass, and rain. Plenty of rain. He has a kind face, a lovely smile, but the everlasting winter is hard.

"It has certainly been the coldest, longest spell I can remember, especially this last eight to 10 weeks. It's horrible to work out in. Now you'd expect to be overseeding, but when there's snow on the ground you can't do anything.

"The temperature needs to be above 9C for the grass to grow, we're lucky if it reaches 3C. We have to cover the seed up with germination sheets and water covers to try to keep some warmth in."

The team of eight - five full-time, one part-time and two seasonal - starts work with the (notional) sun at 7.30am. The layers go on - T-shirt, jumper, body warmer, fleece, coat, scarf, hat, another hat, and great big gloves like oven mittens, designed for giant freezers, warm but unwieldy, leaving wearers incapable of answering a phone.

But the cricket season will not wait for warmth. There is a set of nets to get ready for the players who return to training next Tuesday after a pre-season trip to Abu Dhabi.

There are groundsheets to lift, but carefully, let go if the wind gets them or see your arm ripped off. And the rolling and the mowing goes on - horrible jobs in the cold when the biting wind leaves the unlucky man frozen in the driving position.

This time last year, it was 18C and Merchant was watering the square. Today, the team are managing only an hour outside at a time before coming in to thaw with a hot drink.

See rest of the article on the following link :-The Telelgraph