0 Presentation is the key at Castle Stuart 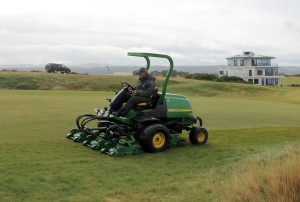 As Turnberry is to Ayrshire and Gleneagles is to Perthshire, Castle Stuart Golf Links has been conceived to be for the Scottish Highlands - a seaside golf links in this historic region of the UK.

A championship links overlooking the Moray Firth, Castle Stuart was voted a world top 100 golf course from the outset, as well as 'Best New Course' by Golf Magazine USA when it first opened for play in 2009. From 2011 to 2013 it hosted The Scottish Open, which returns to the course in 2016.

"From the moment construction started in 2006, it was always our ambition to attract a major tournament here," says course manager Chris Haspell, who started his career in groundsmanship in the early 1980s before moving into golf at the end of that decade.

Chris became course manager at Castle Stuart in 2006, and now manages a team of 15 greenkeeping staff in the busiest summer months, which grows to 50 for The Scottish Open.

A valued addition to the course maintenance fleet is a John Deere 8800 TerrainCut rotary mower, pictured with deputy course manager James Hutchison at the controls and the club's distinctive art deco clubhouse in the background.

"I'm not a great believer in one size fits all when it comes to machinery purchasing," says Chris Haspell. "As far as possible I always try to get something that suits the needs of the golf course best, and we bought the 8800 on its specification.

My first experience of John Deere was when I had just moved over to Denmark in 1995, and the course I worked at operated a 3235 fairway mower.

"Here at Castle Stuart we were looking specifically for a mower that could be used for course shaping, on the semi-roughs and for the intermediate cuts, and which could closely follow the natural contours of the golf course.

We'd tried a number of different machines, none of which were exactly what we needed for our precise course requirements.

"Our local dealer salesman Craig Chalmers of MacGregor Industrial Supplies demonstrated the 8800 and it proved to be just what we wanted. It's reliable, stable in operation and can basically go just about anywhere.

Occasionally we set it up to cut higher and do the main roughs as well, which is the beauty of it.

"With this mower we're usually cutting just once a week, occasionally two or three times at most, so it's very capable of doing the jobs we ask of it.

The club has no members, so we have to please the visitors all year round - we pride ourselves on preparing the course close to tournament standard all year round anyway, so presentation is the key, and the John Deere 8800 gives us that extra quality finish that we require."