0 Presenting a picture-perfect course at Killarney

At Killarney Golf and Fishing Club, presentation is everything. With breathtaking views out over Lough Leane and the undulating Killarney National Park beyond, players come from all over the world to experience the two, 18-hole Killeen and Mahony's Point courses. 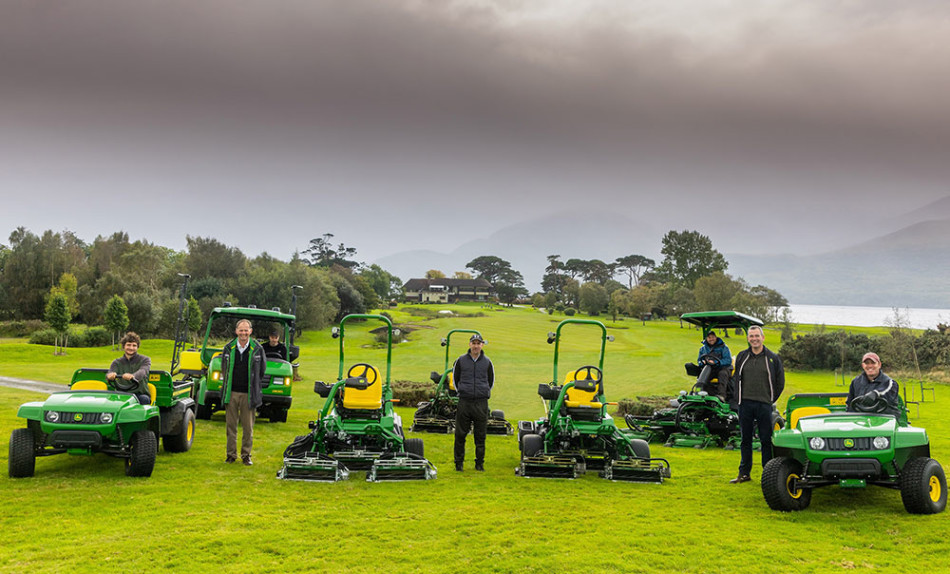 With such rich heritage and high expectations, the greenkeeping team has to maintain the highest possible standards to satisfy the 500-plus golfers who could arrive to play at the complex during its busiest days of the year.

Enda Murphy is in charge of the 18-strong team responsible for presenting the course. He's in his 30th year working at the club after joining as an apprentice from school.

"I completed a four-year apprenticeship in Killarney and then worked a year at Wayzata Country Club near Minneapolis in the States," he explained.

"It was wealthy club with 28 greenkeepers for one 18-hole course, but what struck me was how neat and tidy the whole place was. The machinery sheds were immaculate - everything was organised and every machine had its place with a back-up machine in reserve too. I thought the whole attention to detail was amazing and something I wanted to bring back to Killarney."

Enda became head greenkeeper in 2013 and takes immense pride in setting up a course which will live up to members' and visitors' expectations.

"It's all about the location here - when you're out on the course on a beautiful spring morning there is no better place," he said. "When every hole is neat, tidy and looking sharp, that's what it all about and what we strive to achieve."

Being such a popular destination for visiting players while keeping the large playing membership happy is not without its challenges.

Enda says he has 1.7 metres of annual rainfall, a herd of 40 Irish Red Deer, and a constant procession of players to contend with, plus the environmental responsibility of maintaining a course so close to the iconic Irish lakes.

"We have a high level of play which creates compaction, wear and tear, he said. "Having lots of rain on a busy course is also a challenge but we have to keep golfers happy - we have strong competition from the other fantastic courses in Ireland."

Last year Killarney's members' council - with the support of the membership - put pen to paper on a new fleet deal to replace its aging mowers and other course machinery.

"It came to a point last summer when greens mowers were breaking down on the morning of a competition, and the back-up machines were cutting tees because the tees mowers had broken," Enda said.

"We were working on fairway mowers that were 10 or 15 years old and the repairs were starting to cost more than what the machines were worth, so a change was definitely needed."

Enda and his team are familiar with a number of brands and researched prices and specifications as part of the purchasing process, but decided to stay loyal to John Deere as their mowers and utility vehicles had served the course well for a long time.

For cutting they purchased two new 7700A fairway mowers with rear roller power brushes, two 2750E hybrid greens mowers with tender conditioners and 14-blade reels, and two 2750PC mowers for tees and surrounds. The club also took a new 1570 front rotary mower with 72-inch deck and a 9009A for tackling the rough.

For full course maintenance the new fleet also included a 2030A with ARC HD200 sprayer, three TS Gators and a 4066R compact tractor.

"A big factor in the decision was that we have a dealer on the doorstep in Seamus Weldon so parts, sales and servicing is right here which is really convenient," Enda said.

"They are good machines but if something goes wrong I can get a new part in 10 mins and get the machine back up and running in no time. That's really important for us here on a busy course where we need to get the job done and be out of the way so golfers can enjoy their game."

So far Enda is delighted with the new fleet - purchased using John Deere Finance - and so is his team.

"When you're going out and everything is working it's just a pleasure to do the job. The team gets frustrated when something takes too long and things break down - we're just trying to get everything done to a high standard and then move on as quickly as possible.

"You can really notice the difference in the quality of cut and the reliability of the new machines. We now want to get into a rhythm of replacing them every five years, ideally. Bookings for the summer are looking really strong so it's going to be another busy year as we, hopefully, come out of covid and look forward to welcoming players to Killarney."