Journey to The Presidents Cup

Despite my flight being cancelled (thank you Jetstar) I am glad to say that I am finally here at Royal Melbourne to join a team of 60 to prepare the course for one of the biggest golf tournaments in the world. Seeing the course now compared to 8 months ago when I was last here is a great feeling. The fine fescue surrounds have matured and really thickened up leaving a superb surface. I can imagine this being a big talking point for the golfers when they play them. The Suttons mix greens are completely Poa annua free and amazingly firm. There is also complete coverage of the legend couch fairways.

Day 1 (Monday) consisted of an induction with all the volunteers and then I was given the task of divoting tees with a gentleman named Peter from Royal Sydney Golf Club. There are greenkeepers volunteering to be here from all over the world! It's great to be a part of it. It's also great to see some New Zealand greenkeepers here as well - Mike from Cape Kidnappers and Phil from Royal Auckland. Following divoting I set off to hand water greens. Then after work I caught up with the PGG Wrightson Turf Apprentice of the year (2011) Ben Payne and that caps day 1!

Day 2 (Tuesday) started off with everyone being called in due to lightning in the area but following that Tony from Royal Perth Golf Club and I used 2 inch plugs to remove any imperfections in a couple of the west course greens. 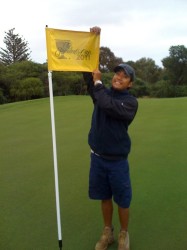 Day 3 (Wednesday) kicked off with a 90% chance of 30 - 40 mm of rain but as it was the last day that the course was open we had a busy morning. Golfers were off tees 1 - 10, 17 and 18 at 8am. Thanks to the huge numbers of staff the bunkers could get pushed up (washouts from the rain) and raked within an hour. So this morning I was hand raking bunkers with another gentleman, Matt from Royal Perth. Following the morning setup there was a walk through the water treatment plant for workers who had not seen it before. My next job was to reinstate some plugs which had been taken out to repair greens imperfections. While I was taking plugs from the nursery, Andrew Boyle (West course foreman), walked past with the group he was showing the water treatment plant to and he gave PGG Wrightson Turf a huge mention regarding the Suttons mix which I took great satisfaction from.

In the afternoon I was cutting the composite course fairways along with 3 other workers. We all worked in unison going across the fairway; so a total of 4 fairway mowers all working together and there was a truck which followed us around where we dumped our clippings into.

Stay tuned for more as the journey unfolds....

The PGG Wrightson Turf blog is up and running! Check out the regular entries on The Presidents Cup by PGW Turf Rep Joe Johnson. Stay tuned for more regular updates and photos and check out the PGW Turf Facebook page.