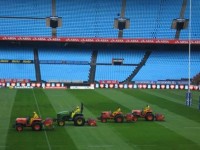 The Loftus Versfeld Stadium, situated in Tshwane/ Pretoria, is the oldest stadium (from 1906) used for the World Cup and will host 6 World Cup matches. It is home to one of the country's top rugby teams, the Bulls, who had to play their Vodacom Super 14 match on April 24 in pouring rain, only 6 weeks before the start of the World Cup.

Keep It Green is the contracting company in charge of the pitch maintenance, and used 4 Verti-Drain machines very shortly prior to the match. The Verti-Drains were equipped with solid tines of diameter 12mm's, with a minimum amount of kick set on the tines in order to let the water drain away quickly.

The pitch inspection after the game showed that there was little wear and tear and certainly not much to be worried about for the upcoming FIFA Soccer World
Cup.

This was in stark contrast to the B-field, to where another match was moved at the same time and which changed in a mudbath.

Stadium manager Hugo Kemp was happy with the way the main pitch withstood the battering, especially as 100mm of rain fell overnight - 70 of which during a
torrential storm.

"Looking at the pitch today, it really withstood everything and is looking very beautiful at the moment. The drainage of the pitch worked very well and we were
very impressed with the way it took so much rain, but didn't sustain much damage on the day. The grass didn't suffer much and didn't break apart and the roots are now really set for a good season ahead," Kemp said the following day.

Bulls captain Victor Matfield was similarly impressed, saying there were times when it felt like a dry pitch, even though it was in wet conditions.

"We were very surprised at the pitch, especially given the amount of rain it took but at times it was dry, and very firm and not like we were expecting in the wet
conditions.

The outer fields are a stark contrast to the main pitch and FIFA officials can rest easy knowing the Bulls have certainly kept their word to deliver a fine surface.
*Keep It Green is the pitch maintenance contractor in charge of 2 World Cup stadium fields and various trainings fields spread over South Africa.