0 Pride and Passion shines through at Dunaverty Golf Club

Cattle are free to roam parts of the course - removing cow pats from the fairways before mowing remains a time consuming task!

There are many clubs that are regularly referred to as a 'hidden gem', but Dunaverty is all that and more. It sits on the most wonderful coastal setting, is kept in fantastic condition and, even though it is only 4,799 yards off the competition tees, it has a very testing layout.

Jimmy and I could not have asked for better weather as we took the twenty minute drive south from Macrihanish. We were met by Jim Cooper, the Club Master as he

is known in these parts. Jim has been at the club for three years and is employed to ensure the members and visiting golfers sample the best of Kintyre hospitality, as well as playing some of the best greens in Scotland.

Jim's favourite hole is the 11th, where the views are quite stunning, looking out across a spectacular landscape, Sanda Island to the south, Ailsa Craig and Ayrshire to the east and Northern Ireland to the south west.

This Par 66, 18 hole natural links course was founded in 1889 by a small group drawn from the surrounding farms and community of Southend. The original layout was for an 18 hole course which began on the opposite side of the Burn at what is now the 15th. The course was completely remodelled and extended before the Second World War when the first clubhouse was sited behind the Wallace Cottages, part of Southend Village.

The course is sited around Dunaverty Rock, a long established fortification which once sheltered Robert the Bruce. It is most famous for the conflict between Scottish warring factions in 1647, which culminated in the surrender and subsequent massacre of the 300-strong Royalist garrison by the besieging Covenanters.

Dunaverty Castle was subsequently razed to the ground and precious little remains.

The course is laid out amongst the sandy seascape which links South Kintyre's farmland to the sea and, through which, the Conieglen Burn flows, and Dunaverty Rock towers above.

As with many courses, Dunaverty fell into disrepair during the war years but, with a strong sense of Scottish pride and tradition, the following years saw Colonel 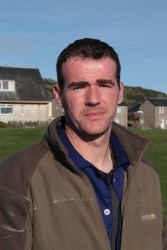 Taylor, himself the son of one of the founder members, together with a number of volunteers, take responsibility for restoring the course.

Around the same time, George MacMillan was appointed greenkeeper to undertake the restoration. Again, in keeping with tradition, Willie MacMillan followed in his father's footsteps by succeeding him as Head Greenkeeper. However, after serving the club for over forty years, Willie decided to hand the reins over to his then assistant, David Scullion, who himself has worked at the club for the best part of fourteen years, taking over the head role in September 2010.

Willie has decided to stay on, but now only works two days a week, leaving David to do the rest of the work by himself. So, in effect, the whole course is maintained by two staff - one full time and the other part time! The quality of their work is as exquisite as the location.

The equipment is pretty basic. Greens are cut using two John Deere 220B pedestrian greens mowers, with two ageing Ransomes Certes in the shed for back up. Fairways are mown using a John Deere 3235B five gang fairway mower, and a set of old trailed gan

gs is used for cutting the rough. Two tractors - a Kubota and New Holland - are used to tow the gangs and for transporting materials.

When David finds the time, he catches up with other essential works, such as controlling rabbits, thinning out gorse plantations and making topdressing using local beach sand and seaweed. In the winter, he spends much of his time servicing equipment.

During our course walk, we made our way to the 5th, where we caught up with Willie who was cutting the green. After a quick chat, we moved on to Jim Cooper's favourite hole, the 11th, which he describes as one of the "best holes in golf". I have to agree; it is a 232 yard, par 4, with spectacular views from the tee.

We then walked a few more holes to take more pictures and view the course from different aspects. The condition of the course was excellent.

Four greens have to be protected from free roaming cattle, using sturdy electric fences. However, removing cow pats from the fairways before mowing remains a time consuming task!

The course is a haven for wildlife, with an abundance of birds, flora and fauna; and there's even a chance of sighting an otter to add to a truly memorable experience.

As you may have gathered, I was very impressed with the course, and the way it is being managed by such a small team. Materials and budgets are next to nothing.

To be able to work in such a beautiful location must be a privilege, and you can see why both Willie and David have spent most of their working lives looking after a very special jewel amongst Scottish golf courses.