"There are two key requirements here - white headstones and green grass. That might not sound like a tall order, but our working environment presents a unique set of challenges"

Situated on the side of a hill three miles west of Cambridge and flanked by woodland, the American Cemetery is owned by the American Battle Monuments Commission (ABMC) which administers and maintains twenty-four permanent American World War II burial grounds.

The thirty acre site was established as a temporary cemetery in 1943 on land donated to the United States by Cambridge University, and later selected to become the only permanent American World War II cemetery in the British Isles before being formally dedicated in 1956.

It is the final resting place of American servicemen and women who died in the invasions of North Africa and France, whilst training in the UK and its surrounding waters and as crew members of UK-based American aircraft. 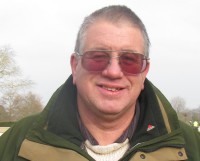 The proportion of the site laid to turf is approximately 20 acres, which accounts for 75-80% of Grounds Manager Les Turner's team's workload. Six gardeners, a mason and a mechanic are responsible for all aspects of the site, including the 3,809 white marble headstones which extend row upon row in sweeping concentric arcs across the lawns.

With more than 60,000 visitors to the site each year, Les's remit is clear.

"There are two key requirements here - white headstones and green grass," he explained. "That might not sound like a tall order, but our working environment presents a unique set of challenges."

"We have very heavy clay soil, so moss is a problem for us, and we are unable to use iron as it stains the headstones bright red. We rely mainly on cultural practices rather than chemicals to maintain healthy turf to avoid any damage to them. We scarify and mow, but we're unable to use a strimmer as it also causes staining."

Watering and feeding the turf around the headstones has also proved challenging. 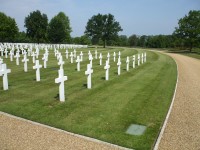 "The application of turf fertilisers has been problematic. We've sent headstones away to fertiliser manufacturers for testing because there have been instances where they've become discoloured and have had to be replaced. An irrigation system was installed here in 1992 but it has reached the end of its lifespan. It got to the point where we were having five or six breakdowns per year which is why we decided to look at our options for providing water to the site over the coming years. Because of the heavy clay, drainage used to be an issue here but we've had a new drainage system put in with lytag banding which has remedied the situation."

Because of the American connection, the cemetery contacted Roger Lupton at Lely UK, the UK Toro distributor, who suggested five companies that could tender for the contract. 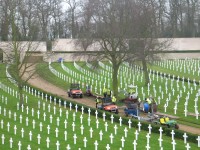 We wanted a system that would last thirty or more years," Les confirmed. "MJ Abbott have a superb reputation in golf and, with more than forty years' experience in water management, we had confidence that they'd provide us with support for the lifetime of the system."

Last year, Les visited several of the ABMC's sites in France where fertigation systems had been installed. He immediately saw the advantages of applying nutrients and water simultaneously in irrigation - the ability to carefully control and adjust the supply of nutrients, with no excesses or deficiencies, resulting in a uniform surface with better colour and removing the need to apply granular fertiliser, reducing leaching losses and the workload for site staff.

Still somewhat sceptical, but undeterred, he returned to Normandy last November with staff from MJ Abbott to look into the feasibility of such an installation in the UK.

"One of our sites at Lorraine had the best grass I had seen last summer in a non-golf application. The final specification was based on our experiences across five sites in Europe. I had talked to many experts who repeatedly told me there would be difficulties." 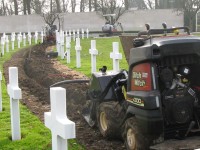 At the heart of the new installation is the fertigation system which is installed alongside the pump station. The fertigation system is made up of a bunded fertiliser tank, a tank mounted mixer, a variable speed fertigation pump and a system controller which takes information from the system flowmeter, pH and EC sensors. When in operation, the fertiliser solution is pumped under pressure into the irrigation pump station discharge pipework, where it is thoroughly mixed with the irrigation water by a bespoke static mixer within the pipework. The flow-rate is varied as required to match the current output of the pump station and the EC and pH settings made at the controller.

The original specification called for an 'off the shelf' pump station from a European manufacturer. MJ Abbott has always built its own pump stations, allowing the design to be fully customised to the site requirements. "After some negotiation, they persuaded us to give them freedom in this element of the system," Les verified. "They selected pumps, variable frequency drives and a pump station controller manufactured by Grundfos. The controller allows direct communication between the pump station and the irrigation control system, and also allows their support staff to directly access the pump station via the internet."

The pump station and system controls have all been manufactured at the company's workshops in Wiltshire. Stainless steel pipework and valves have been used to prevent any reaction between the system components and the fertiliser.

The pump station and fertigation system have been installed beneath the chapel where the walls are 18" thick. The water supply is drawn from two existing underground concrete-walled tanks, which were built as part of the original cemetery layout.

The fertigation system will feed a new irrigation system comprising a combination of spray and drip irrigation, using equipment manufactured by Toro, operated from a GDC irrigation controller, complete with hand-held radio remote control and a weather station.

The turf between the headstones will be irrigated by purpose-made nozzles produced by Toro for use on all of the ABMC sites across the world. The nozzle, fitted to a Toro 754 rotor, produces a steep spray trajectory, enabling the jet of water to clear the headstones without impacting. All the sprinklers are being installed to precise locations and set perfectly flat to enable them to work effectively.

The system will also provide automatic watering to public walkways and landscaped areas in the Cemetery Mall, West Mall, The Flagstaff and around the Chapel. 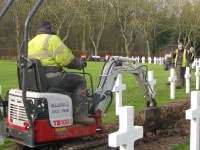 Contracts Manager, Nathan George, accepts that the twelve strong site team have to work within extremely restrictive conditions: "It has been a complex project that has required a huge amount of attention to detail. The cemetery has remained open to the public during the five month contract period, so we've had to be efficient in our methods, exacting in our reinstatement and respectful of our surroundings at all times."

"Working between the headstones has proved especially challenging. There's a very limited turning circle for machinery, so we used a micro excavator and a pivot-steer pedestrian trencher purchased specifically for the project to trench within the 600mm wide gap. The positioning of the trenches has to be spot on and each area left exactly as we found it, so the turf was removed, then relaid, in small sections to prevent it drying out."

The new system will give Les a greater degree of control over the management of his turf than previously. He'll control the irrigation system from his office using Toro's Site Pro irrigation software. The fertigation controller will also be remotely accessed via a software package which will enable him to view nutrient doses and historical data.

Finally, the irrigation pump station has been fitted with a GSM alarm device, which will send him a text message immediately following any fault with the pump or fertigation system.

Mains water is the only available source for the site and, with prices rising, Les says it's important that water usage is as efficient as possible to reduce costs. 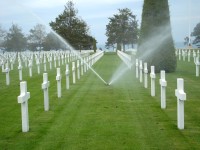 We expect to conduct soil tests at twelve week intervals. The new weather station will aid us with evaluating evapotranspiration rates to ensure the correct amount of water is delivered at head. One major problem we may have with fertigation is too much rainfall. We won't want to waterlog the soil just because we need to put on additional nutrition."

"Because nutrients are being applied in the irrigation, it's imperative that the head-to-head spacing of the sprinklers is accurate to ensure that there aren't areas which receive too much or too little water and fertiliser. MJ Abbott used a robotic total station surveying device to ensure pinpoint accuracy for the sprinkler positions. Testing and early use of the system will highlight any issues with coverage and sprinkler spacings can be adjusted accordingly. ABMC has been in negotiations with several suppliers of soluble fertilisers to run the system with, and we're close to making our final selection."

Les attended a training course on the new system in Paris last December and is in constant contact with his counterparts in Normandy and Lorraine about the project. ABMC feel that the selection of the right contractor has ensured a smooth installation and, according to Les, indications are that there will be few teething problems.

"The project is on schedule, despite the harsh conditions experienced this winter. The on-site team is now finishing the last sections of landscape irrigation before starting to test the system."

He is unperturbed by the prospect of it becoming operational. "I'm enthused, not nervous about using it. We're pleased to be pioneering the use of such a system in the UK, and the success of our other sites on the continent gives us confidence that it'll do the job well."

Pitchcare will be reporting on progress with the system and Les's turfcare regime in a future issue. 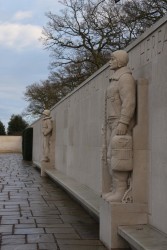 The Reflecting Pools & Tablets Of The Missing

Between the Visitors Building and the Memorial Building stretches the centerpiece Great Mall within which, and parallel to, the Tablets Of The Missing lie two giant reflecting pools. Either side of the pools the walkways are bordered with flower beds containing Polyantha roses and bounded on the north side by a row of single double-pink hawthorn trees.

The 'Tablets Of The Missing' are a series of large tablets inscribed with the names of over eight thousand servicemen killed during the war but whose bodies were never recovered. The Tablets Of The Missing are guarded by four giant statues depicting a sailor, a soldier, an aircrewman and a coast guard.