Derby County FC began life in 1884, as an off-shoot of Derbyshire County Cricket Club, formed thirteen years earlier. In those days the club played their football at the Racecourse ground (still the home of the county cricket side) but, in 1895, moved to the Baseball Ground, their home until 1997 when they moved to Pride Park. 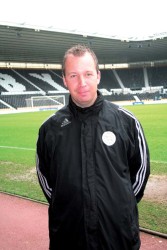 In those early days there was no football league, so 'The Rams' had to make do with friendly matches and FA Cup ties. The 'friendlies' helped to establish the club and success in the FA Cup of 1885 put the club firmly on the footballing map.

Head Groundsman is Andy Crofts who joined the club straight from school in 1991. He was promoted to Head Groundsman when Mark Robinson left in 2006 to pursue a career in sales. "Mark was great to work for" said Andy "and he taught me so much."

He has a staff of six who, between them, maintain the Pride Park stadium and academy training ground's pitches.

Andy and his assistant Paul Thompson are based at the stadium and Paul Shepard, Dan Tunnicliffe, Mark Murrey, Dan Elvery and Paul Hilditch work at the training ground. All have achieved NVQ level 2, with further training given when required.

"Mark always kept a diary of maintenance regimes carried out on the pitch and the amount of games played. I have carried that on as I find it a very useful tool" said Andy.

"Those figures only represent league matches. At the end of the season there are over thirty corporate games played on the pitch as well. Nigel Clough (Derby County's manager) is very aware of the needs to protect the pitches from excessive wear, so he very rarely uses the stadium pitch for training purposes."

Pride Park is a modern stadium facility with a seating capacity of 33,597.

The pitch is a fibresand construction, the top 100mm being fibre rootzone from Mansfield Sand overlaying a medium sand profile that sits on a stone carpet drainage layer. There is undersoil heating at a depth of 250mm and 300mm apart which, last season, came into its own during the worst of the winter weather.

"When using it I have to be careful not to 'over cook' the rootzone and dry out the pitch profile, so I water the pitch to keep it moist at depth" said Andy

"I get in Mallinsons to help out with the renovation work which begins as soon as the corporate matches are completed. This year the top 15mm of the pitch were koroed off and then power harrowed to open up the fibres. It was then topdressed with 225 tonnes of new 80/20 rootzone material with a small percentage of fibresand added."

"Some root enhancement and zeolite were applied to the pitch to help improve growing conditions."

"The materials were then raked and rolled, and the area overseeded with sixteen bags of R14 that comprised a mix of four perennial ryegrass cultivars: 30% Greenfair, 30% Hugo, 20% Action and 20% Greenway/Berlioz, sown at a rate of 40g/m2. This was designed for rapid establishment and good wear tolerance."

"A pre-seed fertiliser is applied with an NPK ratio of 8:12:8. Once the seed has germinated, and reached a height of 35mm, we will begin our cutting regime, first using pedestrian rotaries before bringing on the Dennis G860 cylinder mowers, gradually reducing to the match height of 26mm."

Further feeds are applied; an NPK 12:0:12 plus a dose of Primo Maxx at a low rate 0.6 litres /Ha, before increasing to the full rate of 1.6 litres per Ha in the growing season.

"We have recently invested in a Toro Procore that I am finding invaluable" says Andy. "It usually takes about three hours to tine the pitch. We also vertidrain every four or five months to ensure that the top four to six inches are kept decompacted."

"Managing sand based pitches is not easy, but the reduction in divots is a big benefit. But, stability, colour and vigour can soon be lost so, it is essential that we keep the pitch well watered, fed and regularly mown to improve sward density."

Andy also keeps an eye out for any disease, keeping the turf in good health with a combination of cultural practices and the aid of fungicides and herbicides. "It is important to reduce the incidence of disease, leaf spot is particular damaging if you get it in the winter months. Regular brushing, grooming and dew dispersal helps".

The Moor Farm training ground took eighteen months to complete. The site is very open, and it can get very windy. As part of the planning conditions 3,500 trees were planted to act as wind breaks.

The forty-eight acre site consists of six plateaus, three of which have pop up irrigation. These pitches mirror the one at the stadium. They are all in constant use.

"The weekends are particularly busy" says Andy. "Every Saturday we have the academy team, u-17's and u-19's on the pitches and then up to four games on Sunday."

Paul Shepard is in charge of the training ground. He has a staff of four to look after everything, with one member, Paul Hilditch, dedicated full-time to the garden and non playing areas.

End of season work on two of the pitches was carried out by Boughton Turf Management. This entailed koroing off existing vegetation, relevelling, topdressing and oversowing with Rigby Taylor R14.

The remaining pitches were completed in house, scarifying all the pitches with a Rytec scarifier, applying 60 tonnes of topdressing and overseeding with R14.