0 Pride of the Parish

Colin Burchett is the Ranger at Fair Oak & Horton Heath Parish Council, a position he has held for the past three and a half years. Amongst his responsibilities are the Lapstone Playing Fields, a facility that suffered poor playing surfaces and cancelled matches.
Colin and his staff of two have transformed the grounds to some of the best in the area.

Here he explains how, with some quality new equipment, the assistance of former Southampton Head Groundsman, Dave Roberts, and by badgering Pitchcare members, he has achieved such a remarkable turnaround.

Fair Oak & Horton Heath Parish Council lies just north east of Southampton in rural Hampshire. It has a population of approximately 10,000 many of whom use the sporting facilities at the Lapstone Playing Fields.

Colin Burchett is the Parish Ranger who joined the council in May 2005 having previously worked as a Streetcare and Refuse Manager at neighbouring Eastleigh Borough Council. He passed his Management NVQ Level 4 earlier this year.

He is assisted by two groundsmen - Barry Hansell, with over thirty years experience at various locations, and Matt Trickett who joined in the summer of 2006. Matt has recently attained NVQ 2 and 3 in Sports Turf Management through Sparsholt College with council backing. Both have PA1 and PA6 certification. 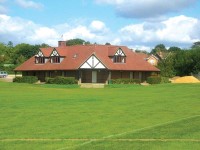 The facilities at Lapstone include a cricket pitch and two senior and one junior football pitches.

Football
The football pitches were laid out twelve years ago on old water meadows with nine metre centred drains. However, the old clay was put back on top, so the two senior pitches have always had drainage issues, with a third of matches being cancelled each season. The council gravel banded six years ago, but it wasn't maintained. If it rained significantly during the week then there was no option but to cancel weekend matches.

The junior pitch faired slightly better as it is sand based, with drains every five metres, resulting in much better drainage. However, it was obvious that something needed to be done, and urgently, to improve the playing surfaces.

Independent advice was given by Dave Roberts, the then Head Groundsman at Southampton Football Club, on how we could improve the pitches and what machinery would be best for us if we could get agreement from the council.

Matt is a steward at the Saints and got to know Dave through that. We went to St Marys to help mark out the pitch for a pre-season friendly and had a long chat with Dave about our problems. Subsequently, he came over to Lapstone and spent all morning telling us what we needed to do and how we could get the best out of our new machines (subject to approval of course). 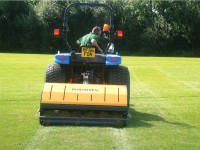 He is a really nice bloke and has been very helpful. Coupled with the excellent ongoing advice we have received from Pitchcare members on the message board I feel we are making real progress now.

Based on Dave's recommendations, and the undoubted respect that he has, the council agreed, in the autumn of 2006, to purchase a 40hp Hydro New Holland compact tractor, a Major roller mower, an Imants Shockwave, a spring tine harrow and a Browns slitter. Now we feel that we have more control over maintenance.

In September 2007, White Horse Contractors laid new 80mm drains every nine metres (cost approx £26k) across the two senior pitches and the part of the cricket outfield that isn't also part of the football pitch. There has been a definite improvement, there are still wet areas, but not above the new drains. We've had problems since with the trenches settling and getting the grass to re-grow, but we are slowly winning. In September 2008, PJ & CM Froud Sportsfield Contractors from Verwood in Dorset, put in 160 tonnes of washed sand on the two senior pitches at right angles to the primary drainage using a Blec Sandmaster (approx £5.5k). It's early days, but the signs are looking really promising, even the worst areas dry within a few hours of a heavy downpour. The aim is to be able to get the tractor on there all year round so we a can spike, mow and maintain.

We carry out end of season renovation work to goalmouths and worn areas using a 60/40 topdressing with Barenburg Bar 9 grass seed. All pitches are overseeded by direct drilling and have a feed and weed treatment during the summer.

We plan (assuming the budget is there) to implement a more comprehensive fertiliser programme as we have established that just treating the pitches once a year leads to diseases and poor quality turf during the winter months. Also, the nutrients will be leached out quickly with the increased sand content. In the summer we will see the opposite effect as the pitches are likely to dry out quicker and, therefore, we may need to irrigate more regularly.

We have put together a yearly maintenance programme which will involve scarification, shockwaving, spiking, verti-draining and cutting more frequently.

We'll continue to topdress in September. All of this will help to encourage longer root growth, keep the top open and as free draining as possible, giving us a better playing surface for both sports.

We've purchased two sets of removable aluminium goals for the two pitches, which has saved us a lot of end of season work and benefited the ten different teams that use the facilities. We often have seven or more matches on the three pitches over a weekend. There is also training during the week, including some clubs from outside the area, but we can't control that as revenue is important.

We received a highly commended certificate in the 2006/07 Hampshire FA groundsman awards. We were really pleased with this but they didn't seem to take into account all the other areas of land (see below) that we, as a Parish Council, also have to manage with a team of two, plus me helping out as and when I can. The overall winner was a private 'fenced off' pitch in the middle of nowhere, whereas we are open to the public 365 days.

The height of cut is maintained between 30-35mm. We mark out with a Fleet Kombi linemarker using Pitchmarker 'C', and use Preline at the start of the season to keep the lines visible.

We receive a budget of £4300 (plus £4500 towards the sand banding this year) and, hopefully, the same again or a bit more next year! Membership fees are £47 for seniors and £23 for juniors.

Cricket
The cricket square and outfield are used by Fair Oak CC who play in the Southern Electric Premier League Div 3.

They maintain the square and we supply the equipment, fuel and all materials. This includes a Dennis mower, a 1.5 tonne Stoddart and Pitt roller, a sarrel roller plus all the usual 'other' equipment.

We cut the outfield to 20mm, twice a week. We took advice from the local ECB pitch advisor on how we could improve the outfield scores and, this year it received its highest ever score, even with the scarring from the new drain trenches.

They club has a comprehensive youth set-up, runs four teams and has disabled and girls teams. They have supplied their own permanent nets.
The budget for cricket is £4500 and the fees are £47 for seniors and £23 for juniors (half fees paid).

With the dual cricket /football use we find it difficult to do some of the maintenance properly and at the right times of the year. We can find ourselves having only four or five days changing over from football to cricket and, sometimes, even less the other way round.

The sports pitches are only a small part of our daily work as we also look after two play areas, a skate park, a large formal park, two cemeteries, in excess of seventeen hectares of Country Park, sixty allotments, with seasonal events such as the summer carnival and Christmas lights and trees. We check most sites daily, picking up litter and fly tipping, repairing any vandalism and keeping these areas up to a high standard. We may be taking on a few more areas next year! If we do, I will definitely be asking for another team member.

As you can see we are a pro-active council that are keen on training and trying improve our facilities. We are often told by opposing football and cricket teams that they can't believe it is not a private ground, such is the high standard.

Our pitches are amongst the best in the area when the sun is shining and, from now on, we hope the same can be said even after it rains. Not bad for a Parish Council.