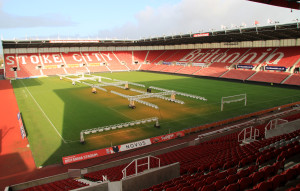 4th March 2014 - 1997 was an eventful year for the UK that saw Labour win the general election, the nation mourned the death of Princess Diana and a sheep called Dolly hit the headlines.

It was also the year when both Stoke City and Derby County Football Clubs moved into their new, state-of-the-art stadiums with Fibresand pitches.

Seventeen years on, and the pitches look as good as they did on their opening games, thanks to their exceptional construction using top quality materials, advanced maintenance techniques and the hard work and dedication of the grounds staff.

The club had moved from the Victoria Ground that it had used since 1878 and at the time of its demolition, it was the oldest operational football ground in the Football League.

Andy Jackson, Stoke City's current Head Groundsman, has worked for The Potters since he left school in 1995, and was promoted to his present position at the Britannia Stadium eight years ago. He recalled the move from the Victoria Ground's soil pitch to the modern Fibre-reinforced sand-based pitch.

"The Victoria Ground pitch had been used for over one hundred years, and it was where I first learned the basic skills of good pitch maintenance," he explained. "The transition from a soil-based pitch to a Fibresand pitch was a steep learning curve, but the standard of surface we can achieve throughout the year now is incredible."

Throughout the winter months lighting rigs and undersoil heating help to keep the pitch in top condition. Andy is impressed by how far pitch technology has progressed since he first started his career, but admits that it is not without its challenges.

"It took a while to get used to the new pitch technology, but we can't do without it now. Sometimes I feel more like an engineer than a groundsman.

For instance, the maintenance of the rigs is a science in itself - the four big rigs and two smaller ones use 350 individual bulbs and it takes a lot of effort to maintain them.

They improve the density of the turf over the winter months, which in turn has enhanced the overall playing surface, so it's definitely worth the extra effort," he explained.

"The standard of pitches and the technology has advanced so much over the past five to six years, and in my opinion, it really puts the UK ahead of the rest of Europe," he added.

Andy and his team of seven are responsible for the Stadium, Academy and Training Ground pitches.

"I have to give credit to the lads who work on the grounds - they are flexible and will work in all kinds of conditions. It's been difficult at times, but they pay close attention to the details, which is what makes us such a good team," said Andy.

Renovations to the Britannia pitch typically start in mid-July with the help of consultant agronomists and other partners including Mansfield Sand. The pitch is re-levelled, seeded and given an eight week growing period to bed the pitch in.

"Groundsmen have to be able to work under all sorts of conditions, but it's about relying on your past experiences, and sometimes just your gut, to know what's best to do," explained Andy. "Experts like Mansfield Sand are invaluable to bounce ideas off - they know their product inside out and can offer advice whenever we need it."

Fibresand is a polypropylene fibre-reinforced silica sand, which is incorporated into pitch rootzones in order to provide extra stability to the grass surface.

When the straight polypropylene fibres are incorporated into the upper sand or soil rootzone and consolidated, the fibres act as a mass of indestructible synthetic grass roots which produce a tighter, more divot resistant surface that is stable, free draining, durable and easy to maintain.

Each winter, Mansfield Sand visits the grounds staff at all clubs where Fibresand pitches have been installed, including the Britannia and Pride Park Stadiums.

Experts assess the pitches by carrying out in-depth analyses of the pitch fibre content and then recommend the best techniques to preserve the high standard of the playing surface.

Andy recognises the importance of the material when it comes to maintaining the pitch quality. "Fibresand gives us confidence in the stability and playability of the pitch, all year round," he added.

Pride Park Stadium (which is now known as the iPro Stadium), was officially opened by the Queen on 19th July 1997 in front of 30,000 spectators. Derby County played their first game at the state-of-the-art stadium in August, after playing at the Baseball Ground for over one hundred years.

Pride Park's Head Groundsman, Andy Croft, and his team of four are responsible for maintaining the stadium pitch, as well as the Academy and Training Ground's ten pitches at Moor Farm.

Born and raised in D 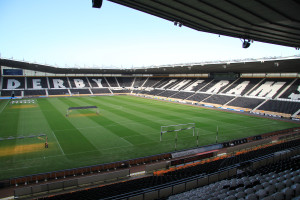 erby, Andy was taking part in a Youth Training Scheme in gardening at the Barnardos owned, Morley Manor in Derbyshire, when his brother's friend mentioned a groundsman's role at Derby FC's Ram Arena training ground at Raynesway.

He went on to work for the Rams for 22 years, and recalled the move to Pride Park under then Head Groundsman and present Mansfield Sand Sales Manager, Mark Robinson.

He said, "I started working for the Rams on 1st February 1991, and since then there have been many changes. The stadium pitch looks and plays much better than the old Baseball Ground and it's far easier to maintain.

What's more, the technology we have access to at the stadium, including undersoil heating and lighting rigs, which are constructed from confiscated equipment seized by local police and built by the team; means that the pitch looks and plays great throughout the year."

The 33,597 capacity stadium has played host to concerts by artists such as the Red Hot Chili Peppers and Rod Stewart, and even a monster truck extravaganza, Monster Jam in 2011.

As a multi-use venue, the Pride Park pitch has to be versatile and resilient to damage, as Andy explained, "We have had a few issues with screws from equipment left in the grass after concerts, but the pitch performs brilliantly thanks to its stability and fibre-reinforced construction.

Even after the monster truck event in 2011 the turf had been stripped back, but the stability provided by Fibresand meant that it looked as good as new in no time. Fibresand is a tried and tested material which grounds staff can rely on to perform year after year."

Mansfield Sand Sales Manager, Mark Robinson, explained the company's commitment to providing support to the clubs. "We provide an expert service to clubs that have installed Fibresand pitches in order to ensure that they maintain the highest standard.

Every year we advise clubs on the required tonnage of product needed to keep the pitch in great condition and work with the grounds staff to suggest tailored maintenance routines."

"Both the Pride Park and Britannia Stadium pitches have consistently performed to the highest standard since they were laid nearly seventeen years ago. They are a credit to the grounds staff and their dedication to maintain and improve the pitches."

Former Pride Park Head Groundsman Mark, began working for Mansfield Sand in 2011 after being impressed by the Fibresand product and service he received.

"I saw first hand how the stability and durability at the Pride Park pitch was maintained, thanks to the unique qualities of Fibresand. Mansfield Sand's dedication to supporting the club's grounds staff was invaluable to me as Head Groundsman.

I'm very proud to be providing that same service to grounds staff up and down the country," he added.

"We're often asked about the longevity of a Fibresand pitch. As you can see with these two pitches, they really have no lifespan limits, provided they are maintained by good grounds staff and supported by Mansfield Sand's expertise," explained Mark.

For further information about Mansfield Sand Company Ltd and the products and services it supplies, please visit www.mansfield-sand.co.uk or call 01623 622441.