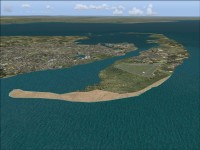 Walney Island is a small sliver of land that lies in the Irish Sea, like a defensive barrier across the tip of the Furness Peninsula, protecting Barrow-in-Furness, its docks and surrounding areas.

The island is just eleven miles long and just under one mile wide at its widest point, making it the eighth largest island off the coast of England, yet the largest with a direct road access to the mainland, linked via the Jubilee Bridge.

Quite where Walney Island got its name from is open to conjecture, but it is believed, because it forms a 'wall in the sea' protecting the mainland, that it is a derivative from that. Locally, it is known as Barrow Island or Old Barrow. 11,000 hardy folk live on the red rock outcrop, and it is here that North Scale and King Alfred bowls clubs are situated.

Whilst visiting Furness Golf Club, our editor, accompanied by the club's Head Greenkeeper, Alick Mackay, dropped in to find out more about the two clubs. He was surprised to learn that it was here that a national campaign to save the UK's bowling greens first saw the light of day

Sadly, as has been reported in this magazine, council cutbacks and continuing pub closures (the traditional home of many bowls greens) has resulted in clubs losing their facilities, a scenario that is becoming even more familiar. Many bowling clubs' existence is often down to the dedication of their members taking on the responsibility of looking after the green, the clubhouse and allied facilities.

The crown green is a relatively new facility, built in 1998 and opened for play in 2000. With little more than fifty members, they are fully dependant on their willingness to contribute to the running and maintenance the club. Over the years, virtually all of the club's sheds, tea rooms and shelters have been constructed by the members.

The club have invested in their own equipment, having two greens mowers, one a dedicated Ransomes greens cylinder mower, and the other a Dennis FT510 mower with 8-blade cylinder, scarifier and sorrel roller cassettes. They also have a Groundsman aerator/spiker that is currently out of action due to a broken crank shaft, so urgent quotes are being sourced to fix it.

The green is mown two or three times a week, focused on days when competitive matches are scheduled to be played.

Cutting heights are kept to 4mm in the summer and 6-7 mm during the winter, With such a mild start to this season, spring renovations were started early, applying some lawn sand (5:0:0) to kill off the moss and then scarifying out the dead moss some weeks later.

The green is 'properly renovated' in September - scarifying and topdressing with a 70/30 mix. The green is also vertidrained in November to a depth of 225mm. They have also hollow tined before seeding and topdressing for the last three years. The two clubs buy their topdressing in a consortium with two other bowls clubs on the island - West Shore and Salthouse - to keep the cost down.

A Vitax microbial 8:0:6 fertiliser is currently used through the season and a wetting agent applied on a six week basis.

Alick Mackay is often called on for advice, and he recommended a Barenbrug seed mixtures, moving from BAR 1 at the moment to trialing Bar Platinium later on this season, which is prescribed for use on bowling greens susceptible to wear.

Watering is undertaken, as required, using travelling sprinklers or hand watering, although the club rely heavily on the weather, with rainfa

ll in the area being generally high, so problems with the green drying out are rare.

John and Gordon keep a diary of the work carried out on the green, keeping records of products used, dates applied and recording any significant problems.

Whilst at the club, I met some of the lady members who were having an afternoon social get together. I asked them what their annual subscriptions were, and was told "between £10-15 per year, with up to a £1 charge for every game; not nearly enough money in my opinion but, as long as they all help to keep costs down and attract more members along the way, it is a blueprint that might just be sustainable. Typically, the club's existence is down to the resilience and determination of a few individuals.

Gordon thoroughly enjoys working on the green in his spare time. He says that it actually helps him to understand the issues Alick faces on a daily basis at the golf club. 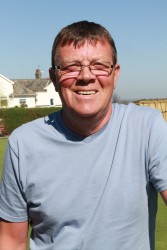 Myself, John and Gordon then headed off to meet Keith Mills, the Greenkeeper at King Alfred Bowls Club, situated a couple of miles down the road. Keith has been looking after the green for eight years and, in that time, has become very passionate about the future of bowling greens.

So much so, he started the 'Save Our Greens' campaign over two years ago. He was so fed up of seeing local greens disappear he decided to get off his backside and do something about it. So, he raised a committee and went to see a number of local planning officers and councillors to see where he stood.

And this is where a stroke of good fortune occurred. Whilst addressing a council meeting, his local MP, John Woodcock, was in attendance and he decided to take up Keith's cause by introducing a 'Ten Minute Rule' bill in Parliament.

The Ten Minute Rule, also known as Standing Order No. 23, is a procedure for the introduction of Private Member's Bills in addition to the twenty per session normally permissible. It is one of the ways in which a bill may receive its first reading.

Any MP may introduce a bill under the Ten Minute Rule although, in practice, it is only used by backbenchers.

To qualify to introduce a bill under the Rule, the MP in question must be the first through the door to the Public Bill Office on the Tuesday or Wednesday morning fifteen working days (three weeks) prior to the date they wish to introduce their bill. Due to the popularity of the Rule, and the difficulty in launching a Private Member's Bill by other means, MPs have been known to sleep outside the Public Bill Office in order to guarantee a slot!

John Woodcock's bill was, in essence, to protect bowling clubs which have been long-term users on their site, and have usually maintained them at no extra cost to the owners, from being hounded out of existence. The bill sought to make it law to give the club first refusal on the land, when it came up for sale.

After contacting every County Bowling Association, Keith was horrified to find out just how many greens had been lost in recent times; the demise of pubs and clubs often being the cause, but local authorities were not without blame either.

His next step was to raise the profile of the game. He became a member (aka thorn in the side) of the local Sports Council, and had all the local bowls greens put under the council's seven year plan for the Protection of Sportsfields and Open Spaces.

The first reading of the Bill was on the 13th July 2011, and was passed unanimously. When the media got wind of the campaign, the profile of the game was raised significantly. Granada TV were the first to contact Keith, and all the local radio stations interviewed him about his campaign, finally resulting in the BBC's One Show taking up the cause and giving the local council some grief into the bargain.

As Keith rightly says, these bowling greens are not just sporting facilities, they are community hubs. He believes they are used more than any other grass surface, often by whole families. The sport, he says, not only keeps kids off the streets, but it keeps pensioners active and families together. Once they are gone we will never get them back, he suggests.

The next reading of the Bill is sometime in May this year - "we need all the support possible," says Keith passionately.

Having shown his passion for the game, it was easy to understand why the green at King Alfred was looking so good. Keith is a very dedicated greenkeeper and keen to provide the best he can with the resources he has. He knows what these facilities mean to the local community and, therefore, that they should be fit for purpose.

The club gets its name from the King Alfred pub, which is owned by the Enterprise Inns chain. However, there has been a change to the licensee, the owners having rented it out to an Indian restaurant. The good news is that the club get their refreshments from the pub/restaurant ... along with many 'happy hour' deals!

Keith harvests rainwater from the pub's roof, storing it in a homemade 4,000 litre capacity unit, which enables him to pump water onto the green as and when required, as well as reducing the amount spent on mains water.

He keeps the green mown at 4mm in the summer, and between 6-7mm in the winter. It is mown four times a week during the growing season.

The green is 'properly renovated' in September - scarifying, spiking and topdressing with a 70/30 mix.

The green is also vertidrained in November to a depth of 225mm. However, this process often results in an outbreak of fusarium, so he sprays with a preventative fungicide to prevent a bad outbreak coming into the winter.

His other maintenance regimes include hollow tining (three times in the last five years), aerating throughout winter, an application of lawn sand in March, and feeds on a four to six week cycle using a combination of liquid and granular fertilisers.

Again, synonymous with the plight of bowls clubs everywhere, annual membership is just £20 per season, with a £1 charge for every game. The club do have over one hundred active members, so the green is well used, and income just about covers costs. Typically, the club's existence is down to the resilience and determination of a few individuals.

I wish Keith and his MP, John Woodcock, success with their campaign, and hope that the bill passes through to the next stage. How can you put a price on these wonderful resources? They should be considered a valuable asset for any community, not an opportunity to save money by landlords and councils.