Potential savings of around 20 per cent in the cost of line marking have been identified by Leeds Rugby following a four week trial carried out in association with Scotts Professional.

The trial was undertaken to assess the savings that could be achieved by adding Primo Maxx plant growth regulator, manufactured by Syngenta and distributed by Scotts Professional, to conventional line marking paint to slow down grass growth and reduce the need for regular re-marking of sports pitches.

Ryan Golding points out that although the trial had been carried out with the full knowledge and approval of head groundsman, Jason Booth, he had been given day-to-day responsibility for ensuring that the trial proceeded accurately and methodically in line with Scotts' exacting requirements. 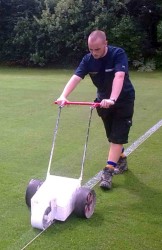 "Guidelines for the line-marking trial were provided by Scotts' National Key Account & Development Manager, Ed Carter, and these were followed very carefully throughout the entire four week process," explained Ryan. "One half of the pitch was marked with standard line marking paint while the other half was marked with a solution containing 2ml of Primo Maxx liquid, added by syringe and mixed with one litre of Impact line marker. A standard transfer wheel line marker was used throughout the trial."

Over the four week period, the lines were marked twice at different times accompanied by regular assessment of grass growth and line visibility.

"By day 14, growth along the line created using added Primo Maxx was being visibly held back and the marking was considerably clearer than the line produced with neat marking paint," pointed out Ryan. "This difference continued through to the end of the trial with no detriment in colour or health of the grass marked with line paint including Primo Maxx.

In practical terms, Ryan believes that the addition of Primo Maxx to the line marking solution at Scotts' recommended ratio of 2ml per litre would eliminate the need for one line-marking operation in every four.

"In other words, we would need to mark out each pitch only three times in a month when previously we would have to do it four times over the same period," he said.

For just one pitch, Jason calculates that the potential saving that could be achieved by Leeds Rugby adds up to £33 a month, based on a paint cost of £26 and a labour cost of £7 per pitch.

For those who do not need or want to buy 5 litres of Primo Maxx at a time, 500ml packs are also available.

"Not only did the trial reveal the potential savings that could be achieved in labour and line-marking solution, but it produced no negative comments from the players or coaches," concluded Ryan. "This ability to reduce pressure on maintenance budgets and staff resources is certainly not to be sniffed at and I shall be recommending that Leeds Rugby seriously consider the use of Primo Maxx as a long-term addition to all line-marking solutions."

The active ingredient in Primo Maxx is Trinexapac-ethyl, which specifically targets the gibberellic acid site responsible for cell elongation in grass. It inhibits vertical growth, diverting growth downward into the root system to produce increased food reserves and lateral stem development. The result is a thicker, healthier sward that better equips turf to withstand extreme temperatures, moisture loss and wear and tear, and helps in the management of Poa annua. Its use has become an intrinsic part of turf management at sporting venues and Scotts has carried out extensive trials at golf and football clubs to establish how it can be used to produce optimum results.

Primo Maxx is available in the Pitchcare Store in Primo Maxx 500ml and 5 Litre packs.