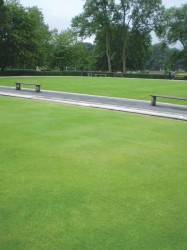 Last year, we reported on trials due to be run by Mark Dempsey, Parks and Street Scene Central Support Manager for Calderdale Metropolitan Borough Council in West Yorkshire, and his team, to explore the effects of a growth retardant on the condition of two bowling greens in Wellholme Park, Brighouse, headquarters of Woodvale Bowling Club.

As TOM JAMES reports, the trials have more than proved their worth

When asked last year what he hoped the trials would achieve, Mark Dempsey said "The regulator slows the growth of the apical meristem but greatly increases the root biomass and depth of penetration by, we calculate, up to 40%. The bigger, stronger rootzone can tap into readily accessible water sources deeper down. It's the best of both worlds - slowing the rate of cell elongation above ground, while bulking up the root biomass, so energy supplies to the turf are going downstairs not upstairs. The result, we hope, will be shorter turf and a darker green, tougher sward that will retain its colour for longer into the year."

The trials, using PrimoMAXX, began last spring and were duly completed in four phases, spread throughout the year, despite the torrential downpours witnessed last summer, which saw the surfaces partly flooded.

After fully assessing the test data, a jubilant Mark proclaims: "The trials were a success. Everything that we wanted to do has been achieved and, what's more, the bowlers are delighted. We now plan to roll out the application programme to all twenty greens in the borough."

In the trials, the team were looking to see if the regulator would reduce the frequency of mowing and the amount of grass clippings.

Calderdale Parks and Street Scene Technical Officer Samantha Ward states: "Well-managed and properly maintained bowling greens are valued, respected and regularly used by people of all ages, backgrounds and genders and have many social, health, economic and environmental benefits. Calderdale is strongly committed to the management and development of these areas, recognising their importance and the need to ensure that they meet the demands of today's visitors and users."

This process produces shorter internodes and leaves without preventing photosynthesis, with the surplus energy used for rooting."

Mark continues, "Our team is committed to following up new developments and improvements to Wellholme Park and its bowling greens, so we embarked on our own trials of the regulator. We recorded our findings from initial application through to grass cutting and then, most recently, on to our soil sample findings and grass sward results."

Councillor Amanda Byrne endorsed the trials. "The overall aims of the project were to prove the positive effects of using a growth regulator within an integrated environmental management system to save fuel, water, fertiliser, pesticide, reduce green waste, time and costs, while also improving the quality of the playing surface."

A repeat application every three weeks was planned during the season, keeping a close eye on ground temperatures. "If they exceed 22OC, the regulator's effectiveness would be reduced," Mark stresses. "This didn't prove a problem in 2007, however it did the previous year when we ran a pilot."

The team anticipated a total of 11 applications, at £3.02 per time, giving the estimated total of £33.22. "Given the projections and targets we set, we were looking for savings of around £1,000 a year to maintain the greens at Wellholme, which would come from reductions in green waste, water savings, fuel, labour and fungicide usage reduction," says Mark.

The method used for taking core samples was the traditional 'cheese corer', although Mark found that there was no precise way in which to split up a bowling green for such sampling. To obtain a good representation of the whole site, an imaginary 'W' was followed and samples taken along a diagonal line as shown.

Three core samples were taken from each of the three greens on site, (two crown green and one flat green) a number we thought to be representative of each of the greens which each cover around 1,400m2. Each core sample was taken to a depth of 15cm, in direct relation to the past soil samples taken which also used a 15cm core depth to test pH levels and nutrient status of the greens."

It was very clear within the first week of the regulator application that the overall colour of the bowling greens was changing. "The grass sward had not only darkened but also had become thicker and shorter. The visual record was borne out in the level of reduction of grass box cuttings taken from the green over the monthly period - from a total of 44 to 30 inclusive; a reduction of 32% in green waste."

"The impact has been to slow the playing surface," he adds, "with grass being greener and thicker rather than browner and faster. This slower surface has resulted in a monthly verti-cut of the greens to try to increase ball speed. The number of grass boxes from the June verti-cut generated 12 boxes, compared to the average number in 2006 of at least 30, a reduction of 60% in green waste."

Comparison findings over the period April to June 07

There were many external factors to monitor throughout the application period, namely grass type, use, overhanging trees, watering, shade, application rate, soil type and sand composition.

These were monitored as the team considered them factors that might have influenced soil samples and grass sward condition. As it turned out, these external factors did not have any significant bearing on the overall results.

Monitoring of water use started at the beginning of the trial and the monthly total of watering was 40 hours and a meter reading of 4,347m3. More on water reduction would be known later in the trial process but it was envisaged that a 25% reduction would occur over the six-month trial period.

With the 32% reduction in grass box numbers over the first trial period (April to June) there was, inevitably, a knock-on effect on the number of times that each green was cut. "Before the trial started in April," says Dempsey, "fuel consumption was 750ml a week, cutting the greens three times weekly. This level later fell to 500ml a week fuel usage on greens 1 and 3 (with green 2 being the control green still using 750ml of fuel) and the greens being cut twice. This 33% reduction in the first trial period was above our initial estimate of 23%."

During the period that greens 1 and 3 were treated, there was a slight problem with fusarium and red thread on these greens. The untreated green (2) did not have any sign of fungal disease. These findings are directly related to the absence of aeration or scarification of the bowling greens in the winter period and no application of any topdressing products. Therefore, the findings and results with regard to fertiliser and fungicide treatments could not be compared until the end of the trial period.

Results speak for themselves

In answer to the question posed in the trial, the results are startling, as Mark records. "The grass regulator has, in effect, reduced the number of grass clippings produced by normal mowing and verti-cutting by 56% and reduced the frequency of mowing with an overall saving of 32 hours over the 32-week season.

It wasn't all plain sailing though, Mark concludes. "Torrential downpours hit the park for the week beginning the 18th of June and this intensified on the 24th when Clifton Beck burst its bank."

"The bowling greens in the park are only two metres away from the beck so, in the space of 24 hours, all three bowling greens were under around 50mm of water. But a team as determined as Calderdale's was never going to let a little water rain on their parade."