The world leading turf growth regulator, Primo Maxx, is now approved for mixing with line marking paint - helping to retain line visibility for up to 50% longer. It also maintains turf quality and eliminates the time, cost and inconvenience of restoring lines burnt-out with total herbicides.

Sports turf managers could halve the time and cost of line marking this season, with a new approval to mix Primo Maxx with line marking paints. Independent trials by STRI have shown the opportunity to retain line visibility for up to 50% longer, compared to line marking alone.

Mixing the turf growth regulator with line marking paint can suppress grass growth for up to six weeks and has been shown to give significantly better retention of line colour and visibility for longer. Furthermore, there is no damage to the playing surface associated with total herbicide applications, which can allow weeds to ingress and create the need for re-sowing at the season's end. 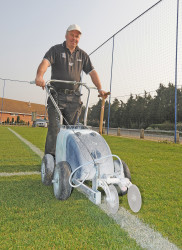 Primo Maxx is approved for use as a pre-mix with paints for wheel-to-wheel application or with spray line marking applicators. The combination has been extensively tested with a full range of commercial paints and line marking equipment.

"At the end of the season, the turf simply reverts out of regulation with no damage or lasting effects," reports Rod Burke of Syngenta. "There is no cost or effort of re-seeding, no bare soil for weeds to establish and, if sports turf is being used for another event over the summer, new lines can be quickly and easily put in place."

"Turf managers who use Primo Maxx on sports playing surfaces have already recognised the improvements in turf density, rooting depth and the added strength of to resist the wear and tear of heavy play, along with up to 50% reduction in mowing requirement and clipping yield," reports Mr Burke. "Now, Primo Maxx can make a further contribution to cutting costs and simplifying management, by reducing line marking requirement by up to a half."

Primo Maxx can be purchcased from the Pitchcare Shop