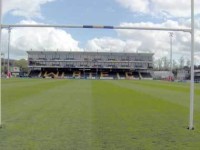 Worcester Rugby Club is situated at Six Ways, just off junction six of the M5 motorway, in 40 acres of countryside. The site was specifically built for the club in the early 1970's.

I have been Head Groundsman for nine and half years, joining when the club had just laid down the main stadium pitch.

We maintain 15 pitches, which includes the one used by our Premier League team. The facilities are used extensively, particularly on Sunday mornings when we have over 500 kids either playing or being coached.

As I said earlier when I joined the club the pitch had just been put down, however it was pretty basic. 600mm of the existing topsoil, in our case Worcester Clay, was stripped off, the sub base levels redefined, a primary piped drainage scheme installed with drains at 5 metre centres and the clay topsoil replaced. Not the best decision; the net result was a pitch did not drain very well. The total cost of the pitch was £30,000, the only good thing was a new Toro pop-up sprinkler system which cost £60,000, not much use if the water ain't going nowhere. Eventually the contractor decided to put in sand bands at 1 metre spaces but lengthways to the pitch, again not the best decision.

It should be pointed out however that I was surrounded by that many experts that any thing I said having come from football did not count, so the clip boards held sway.

It was several years (and the end of the clip boards) before we were able to employ the services of Pugh-Lewis to install the first of a number of secondary drainage systems that would effectively bypass the clay. The first scheme consisted of 50mm wide gravelbands at 1m centres running at 45 degrees across the pitch and making a natural fall into the main drainage system. We now have a pitch that, although being predominantly clay soil, is able to drain reasonably well during wet weather.

Although we had improved the drainage, we were still having problems with sward density and performance. It was not until I had a chance meeting with David Bates from Earth-Tec Ltd that we were able to rectify our problems. Clay soils are renown for holding onto moisture and nutrients. In our case, it was found after a number of soil tests that our soil was holding onto a number of nutrients and not releasing them for the grass plant to take up.

David took some soil samples and tested for soil pH, organic matter content and nutrient levels,. The results showed that there was increasing salt concentrations in the soil, which was leading towards soil toxicity; the posphates (P) was above index 3, quite a high level. The soil was not releasing any Phosphates, therefore there was a need to reduce the input of (P) and release the stored Phosphates.

On the other hand our Potassium (K) was low, so we needed to add more (K) into our soil profile.

With advice from David we changed our management regimes and, in particular, our end of season renovations.

We introduced some Earthtec products into our soil profile. These came in the form of soluble liquid feeds and soil additives. We introduced a homogenous mix of MM35 Mansfield Sand and EarthZone comprising of the EarthLite and EarthMate products that have Carbon and Zeolite properties. These were mixed together and spread onto the pitch, applying in total 90 tonnes of materials.

The whole concept of using Earth-Tec products is to re-activate the natural properties, nutrients and elements in our soil profile.

We also have a programme of additional treatments, consisting of a number of regular liquid feeds, throughout the year.

The results have been amazing. Grass growth seems more vigorous with improved and deeper root growth. In turn, the sward has become more resilient to wear and tear. We certainly have more grass left at the end of this season than in previous ones.

With so many pitches to maintain, we have to prioritise. Our end of season works are confined to our main senior pitches - the stadium first and four other pitches on the main site.

The small junior and mini size pitches have some end of season works, but it is limited to localised repairs and overseeding

This year we have invested over £21,000 in materials and labour. We have enlisted the The stadium pitch received 100 tons of M35 Mansfield sand, overseeded with Rigby Taylor's R14 ryegrass seed mix. The remaining senior pitches were top dressed with Mansfield's 70/30 sand and soil rootzone and overseeded with Rigby Taylor's R11 seed mixture. All the work was completed in four days.I have applied a 12:7:7 straight fertilizer, and may follow up with 28:8:11 later (mid June).

With only two of us looking after the whole site, we are dependant on sports turf contractors being employed for our end of season renovations. The benefit from my point of view is that they are geared up and know what they are doing, and it frees me and Martin Knight (my assistant) to carry on with the major task of maintaining the other pitches.

We use an old Massey Ferguson tractor to tow a set of John Deere hydraulic five gang cylinder mowers, which we use predominantly to mow the ten junior pitches at a height of 30mm.

With time being a priority, we only use ride on machinery for cutting the stadium pitch. I use a Toro triple mower, letting the clippings fly, cutting on a 3-4 times a week frequency during the main growing period at a height between 28 and 40mm. During the playing season (September-May) the height is maintained at 32mm.

I always go over the pitch with our Countax rotary deck mower, which hoovers up any loose debris and cleans the surface ready for marking.

We use a combination of mowers to maintain the other pitches, namely a Kubota rotary mower for the remaining four senior pitches cutting at a height of 50mm (2-3 times a week frequency depending on the weather), and a large John Deere rotary deck mower set at 50-60mm to mow perimeter grass features, banks, slopes and corner plots. In total it takes between 15-20 hours of cut To increase our efficiency we now use a Fleet fast liner marking machine. It is the best bit of kit we have; I can over mark 15 pitches in a morning, averaging about 15 minutes a pitch. My record is 12 minutes, marking at the top speed of 20mph. I even use it to mark the stadium pitch.

We put back divots and repair scars after the game, followed by some aeration work to open up the surface using a SISIS outfield spiker (200mm knife blades). I keep the sward brushed with a SISIS Quadraplay that effectively stands the grass up ready for mowing. Depending on the weather conditions we will mow 2-3 times per week in different directions maintaining the sward at about 32mm.

The players always train on the pitch the day before a game, usually Friday mornings, and they train for at least two hours. Once they have finished we attend to any damaged areas and then mow the pitch with the Countax. We then over mark, ready for the game. The remaining four senior pitches receive similar attention but not quite as intensive. 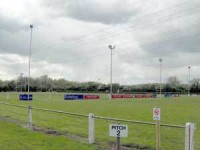 We do have an indoor training facility with a fibre sand surface. Plans are in place to replace it with a third generation sand/rubber infill grass carpet system.

The four senior pitches adjacent to the stadium pitch are in constant use day and night for development teams and squads.

On Sundays we have eleven age range teams U7-U17 with in excess of 500 kids training or playing. Ideally, I would like to see the junior pitch areas maintained by other personnel. That would enable Martin and myself to concentrate on the senior and stadium pitches. With only two of us looking after all the pitches there is only so much we can achieve with the time and equipment we have.

We have now been informed that the stadium pitch has to be moved 2.5 metres so that a new all seater stand can be installed, this will take the capacity to just under 10,000, for next season. First job was to order new alloy posts from Edwards so that our totally un-manageable 44 foot steel monsters (another legacy of the clip boards) can be resigned to history.

My aim is to ensure that all our pitches offer a quality, safe playing surface for the players of Worcester Rugby Club and, at the same time, provide a facility that can support and sustain the club at the highest level in the Zurich Premiership.