Jody Wilson and his team at Mid-Herts Golf Club were tasked with reinstating the tee banks of the 6th hole after they had removed the old railway sleeper steps.

Apart from keeping Golfers and Walkers off of the trial areas, the only problem Jody and his team faced was the nutrient poor, natural acid soil of a Heathland course and of course the weather. Particularly the cold, dry springs that seem only too frequent now in the South East.

Both areas were sown at 40g/m2 and the untreated seed had a 4-3-4 pre-seed fertiliser applied at 35g/m2. No additional fertiliser was applied to the Treated seed. Growth sheets were used to cover the newly sown areas as although the weather was sunny at the time, air temperatures were still only about 8 Celsius. Jody commented that: "The difference between the uncoated and new Pro Nitro coated seed on Johnsons J Tee has been more than significant. Not only were germination and establishment faster with the ProNitro but the colour and density were noticeably better too!"

"The plot sown with ProNitro treated seed has less weed and was also much more consistent across the whole area in terms of coverage. There is also the not insignificant cost benefit too as the treated plot has had no additional fertiliser applied".

Jody also went on to say "I wouldn't have any reservations using Pro Nitro treated seed again being confident that I could get areas back into play much quicker than with untreated seed and it helps my budget go further too." 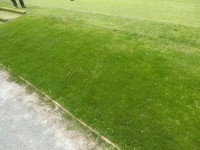 The growth sheets were removed on March 24th as rain was forecast over the forthcoming weekend and replaced again on March 29th as ground temperatures were still very low.

The first cut was with a Flymo on May 26th and no other work had been conducted to either area during this time.

Pitchcare are an appointed distributor of Johnsons seed products.