by Suzanne Lewthwaite
in Industry News
on 15 Oct 2007 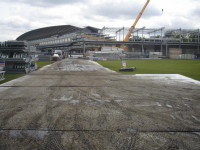 Who exactly would you trust if you needed to park hundreds of cars or allow thousands of people across your turf with minimal damage?

Cue a call to TPA Trax Portable Access, the experts in portable roadways and pedestrian walkways whose 800 years of combined staff experience in the temporary roadway industry means the company has dealt with pretty much everything the great outdoors can throw at it when it comes to providing safe access!

Since beginning life back in 2001 with a small team of experienced people and the backing of businessman David Bowring, TPA quickly grew. The growth over the next four years saw it expand and develop a number of new products for the portable roadway market including steerable roadway panels - a first for the industry - and camber panels which provide orthogonal traction for vehicles when sited across inclines.

TPA soon had prestigious customers such as the Royal Horticultural Society and the All England Lawn Tennis Club on its order books with further work demanding more investment in new products and vehicles.

By 2005, just four years after starting from scratch, TPA had caught the eye of equipment rental specialist group Vp plc and was purchased in November of that year. This injected further capital and allowed TPA to increase its stock holding of aluminium roadway panels to over 90km - enough to go around Australia's Ayres Rock 10 times or the equivalent of 203 Empire State Buildings laid down end to end!

The company expanded its depot at Worksop to the site next door to allow for the additional stock and vehicles and to provide a home for the TPA 'Academy'; the company's own in-house training facility which trains all TPA operatives to its own accredited TVQ qualifications. This initiative won TPA a national training award in 2005 and complements the company's Investor in People accolade.

TPA's products are regularly used for a variety of applications. One of the most common uses through the school summer holiday period is to protect playing fields and playground surfaces when temporary classrooms or buildings need to be installed. 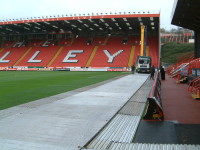 The Elliott group, which is one of the largest suppliers of portable buildings in the UK, regularly uses TPA. "When installing our products, we need to use heavy cranes and equipment to enable us to position the buildings where they are required" says Bob Preston of Elliott. "These cranes can have a huge impact on both turf and tarmac surfaces if suitable protection is not used. If we cause damage to surfaces when undertaking an installation we will be liable for the reinstatement costs" he adds. "We therefore don't take any chances and always specify portable roadway as a requirement as, although some damage may still occur to turf, this is minimised considerably as is any liability."

Over the years as TPA has grown, so has its involvement in research and development. On average the company brings to market a new product every eighteen months in response to customers' requests and requirements.
The latest in this line of products is MD40.

A lighter duty application, MD40 has been specially developed for faster installation as it is delivered via a roll from a specially designed vehicle. This was first demonstrated at the BMW golf championships held at Wentworth this year and it really is an industry first - a temporary roll out roadway that actually works! It's 10 times faster to install and recover than any other system in the marketplace; and it has the ability to be steered around obstacles by making use of its unique hinge joints. It also contours over uneven ground. Installed in 50m rolls, the roadway only flexes one way which greatly reduces the bow wave effect created by heavy or faster moving vehicles - a problem that has plagued previous roll out systems.

As it is so much quicker to install and recover than the conventional panel system, it can be used as stadia cover. An entire stadium can be covered for a concert and recovered within 48 hours keeping turf damage to a minimum whilst providing weight distribution properties that far outweigh any plastic systems that are available.

The British weather has a huge impact on any activity or event held outdoors - just ask any groundsman or event organizer! So TPA works together with customers to find the best solution to their particular situation.

Jobs may include such things as providing hard-standing for maintenance vehicles when felling or trimming trees or providing access for vehicles across a golf course or parkland. Each job is surveyed initially by a TPA field engineer before a site plan and layout is produced showing exactly where the roadway will be installed. This is all done as a free, no obligation service.

TPA's aluminium 'traxpanel' portable roadway system is capable of carrying loads in excess of 1000 tonnes. When installed with it smoother side uppermost, the panels also make excellent pedestrian walkways and can be installed on their ends to create a formidable 3m high fence if required.

Roadways installed at many of the top golf tournaments held at such courses such as St Andrews, Carnoustie, Lytham and recently at the British Masters at the Belfry, need to take into account not only protecting the landscape from the many additional vehicles that descend upon it but also providing access across streams and voids which normally would only form part of the scenery. 700 linear metres of roadway were installed at the British Masters to provide a base for the tented village, grandstands, car-parking and pedestrian access.

TPA's Dennis Butcher has dealt with the R&A, IMG, PGA and other organizers for many years; "Groundsmen are obviously particularly keen to protect their turf and so their requirements have to be considered along with the need to provide safe access for visitors to these events.

We try and work with all parties involved to achieve the best overall answer" commented Dennis. "Although portable roadways themselves will cause some damage to turf, this can be quickly reinstated and will be much less than the damage caused by traffic impact should no roadway be used at all.

We constantly state that prevention is better than cure and the long term implications on ground subjected to heavy traffic and pedestrian usage, especially during wet conditions, can be hugely alleviated by the use of our portable roadway systems." 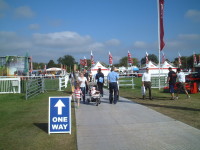 Indeed only last month, the Institute of Groundsmanship contracted with TPA to provide roadways across and around the race-course at Windsor for Saltex.

Although the show benefited from superb weather, how different the story could have been had the summer continued in the same vein we had experienced throughout June, July and August. For those of you who visited the show, can you imagine walking around or trying to get commercial vehicles on and off the site without the roadways that were in place?

There is no hiding the fact that some damage will occur to turf when a roadway is laid on it. However, weighing up the pros and cons, reinstating grass after panels have been laid will be far easier than trying to remove ruts caused by vehicles driving over grass that is unprotected.

All that remains to be said is that the choice is yours, but please bear in mind… prevention is always better than cure!