The Head Groundsman at The Dixie Grammar School in Market Bosworth, Leicestershire, says he has taken the health and presentation of the school's sports pitches to another level this year by using ProTurf fertiliser from Everris. 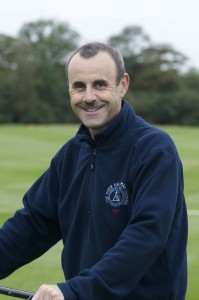 The school recently won an Independent Schools Association award for Outstanding Provision in Sport. Football, rugby, athletics, rounders and hockey take place throughout the academic year. The pitches are also used for extra-curricular activities, sports days, tournaments and for school-run sports camps which take place during the summer holidays.

Steve became Head Groundsman in 2009 following a major investment programme in the site which saw improvements to drainage and the building of a new pavilion. He oversaw the levelling and seeding of the pitches and introduced a new maintenance regime to transform them into first-class playing surfaces.

Steve first applied ProTurf 12-5-20+2CaO+2MgO in mid-March when temperatures were still cool. "We hosted a national football tournament which saw teams from 28 independent schools take part," he recalls. "The air temperatures at that time were 7-8 degrees Celsius and it had been too wet for us to get an application down any earlier. We observed colour take in three days, then just a week after application, colder weather came in and growth stopped. The coating slowed it down, but as soon as the temperatures picked up it kicked back in again. There was no flush of growth, just steady and strong. The plant continued to tiller and we had a full 14 weeks from that one application."

A second application was made in mid-June, and by that time Steve's plans to overseed the pitches had been shelved.
"There's simply no need," he said. "The sward is dense, strong and resilient so our seed has been stored away for use next year. The presentation of the pitches has been superb. Even with limited rainfall and no irrigation, the turf is green and vibrant; it has made a noticeable difference."
Steve plans to apply ProTurf again at the end of August in readiness for the new term when the Potassium element will help pre-condition the turf for intensive play and the onset of winter.
ProTurf contains a combination of Poly-S controlled-release fertiliser technology, readily available urea Nitrogen, and Polyhalite, a naturally occurring mineral sourced from Everris' parent company ICL's Cleveland Potash mine. The Poly-S technology gives consistent, regular growth over a 2-3 month period without growth peaks while the uncoated Nitrogen portion provides an immediate turf response, even in cooler conditions. Polyhalite contains four macro-nutrients - Potassium, Magnesium, Calcium and Sulphur. Potassium is required for the process of energy transfer, especially photosynthesis and the breakdown of carbohydrates. It is also important for the growth of the shoot and root tips. Magnesium is used in plant metabolism and the formation of cell membranes. It is also associated with the control of opening and closing leaf stomata. Fully turgid cells with strong membranes deter disease attack.

Calcium is needed in large quantities for healthy grass growth. Calcium is a major constituent of cell walls and also influences meristem activity. Low calcium levels will weaken cell walls, resulting in inward curling, pale young leaves. Sulphur is an essential turfgrass nutrient needed in large quantities for healthy growth. It is a vital component of many enzymes and is involved in the synthesis of chlorophyll.

Steve wanted an immediate response, then to control the nutrient delivery and sustain growth over 2-3 months. The pitches have no irrigation and one of the main advantages of using ProTurf is its low chloride content which reduces the risk of scorching.