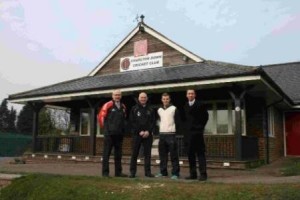 There has been a cricket pitch at Charlton Down since before the Second World War, when it was used by staff and patients at the Herrison Hospital.

However, the old ground had been neglected and not so long ago it was essentially a patch of grass next to a brand new housing development.

Since Charlton Down started a cricket club in 2003, a team of dedicated people have resurrected the picturesque cricket ground, complete with new clubhouse and bar, all-weather nets and a thriving cricket membership.

If you had asked the committee a few years ago if CDCC would be entering five teams into various competitions in their 10th anniversary year, they would have been sceptical, but 2013 sees that dream realised.

Three established teams in the Dor-chester Evening League (Divisions Two and Three) and Dorset Sunday League will be joined by a new team in the Dorset Saturday League, plus a brand new under-11s team in the West Dorset District League.

The under-11s section of the club is aimed at children from Charlton Down, Charminster and the surrounding villages. This will provide a cricketing focal point for the area with a potential to expand into under-13s and under-15s cricket in the future.

The club recently welcomed qualified coaches Tommy Tucker and Cameron Lucas to the team, adding to the experienced players already at the club, and their influence is already apparent during regular Sunday winter net sessions, promising further success for Charlton Down.

The artificial pitch has also been an excellent investment for the club and teams from other clubs that call the Herrison Oval home.

Weather conditions in the last few years have meant many more games have needed to be played on artificial surfaces increasing the impact of the investment.

However, no cricket club is really complete without a real grass square and after a lot of work from head groundsman Ian Springer and his team of volunteers, last year saw the first games on grass for many years.

Add this to two built-in nets and a new post and rail boundary fence and the ground has become a perfect example of picture postcard village cricket complete with modern facilities.

The club's committee was supported by West Dorset District Council and funding from the National Lottery and developers to build the new nets and provide equipment. Since the installation of the licensed bar the venue has proved popular for visiting clubs and as a focal point for the village.

I remember my first game for the club in 2003 after a phone call from my brother-in-law one Sunday morning.

A friendly bunch of gents took to the field, some pulling muscles that would haunt them for days to come, but they were just glad to be out there playing no matter how well or what the result.

Five years later I returned to find an almost unrecognisable club on my doorstep. Some fantastic work has been done and continues to be done by a dedicated committee.

As the season draws near, under-11s' indoor coaching at Thomas Hardye Sports Hall has begun while outdoor training will start on April 17 (6.15-7.30pm) with the first league match on April 22.

Finally, the club owes a debt of thanks to Dorset County Council and West Dorset District Council for grants towards training new coaches plus new equipment.

The Lions Club of Dorchester and District have also donated funding to a batting mat for the under-11s.

As a result of these huge strides in development, the club is aiming to achieve Club Mark Accreditation and will instigate further improvements at the ground, including drainage installation to the main square, sight screens and covers.

The club is always keen to hear from new players and parents of local boys and girls. Contacts are available on the club's website charltondowncc.co.uk and facebook.com/CharltonDownCricketClub