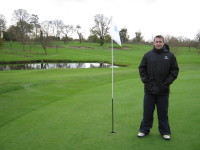 Last winter the championship golf course at Puckrup Hall, Tewkesbury, part of the prestigious Hilton Puckrup Hall Hotel Spa and Golf Club, was under snow for three and a half weeks. An unheard of occurrence for this Gloucestershire club, situated between the Cotswolds and the Malvern hills in a normally benign and sheltered position.

"Usually the snow lasts no more than a week" says Course Manager Richard Jones, who has been at the club for 13 years and knows the 18 hole parkland course like the back of his hand. When the snow finally cleared at the end of January Richard was dismayed to find what he suspected to be pink snow mould on his sand based greens and having worked with Adrian Masters of Headland Amenity for many years he immediately contacted him. "We took photographs and sent them off for confirmation," Adrian remembers. "Richard was right, it was pink snow mould coupled with very stressed grass on the greens." After an application of contact fungicide, increasing soil temperatures led to a rapid recovery.

"I was quite surprised that the greens recovered so quickly," says Richard. "I think it was down to the fact that the plant was healthy and receiving the right nutritional levels."

Adrian agrees. "Richard had applied Multigreen 12.0.44 as part of his autumn maintenance programme. The product is a controlled release fertiliser, reacting to temperature and not moisture, so the nutrients remained in the soil ready to feed the plant once temperatures rose in the spring and the plant became active." 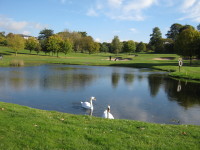 The previous autumn, Richard had also taken measures to strengthen the sward applying a tank mix of liquid feeds, Seamac ProTurf, Turfite and Liquid Turf Hardener a week before hollow coring, over seeding and topdressing. "This ensured that the plant went into the winter healthier with its defence mechanism raised," he continues. "I'd also got in two applications of Throttle, Headland's preventative and curative fungicide."

With the snow gone and the greens recovered, Richard was able to attend to his spring renovation in early March as usual. Heavy scarification and hollow coring preceded, an application of Headland's C-Complex Organic fertiliser, and his spring application of Multigreen 12.0.44 before over seeding and heavy top dressing.

As part of the Hilton Puckrup Hall Hotel Spa and Golf Club, Puckrup Golf Course plays host to numerous tournaments and corporate golf days beginning in early spring. Richard with his team of five full time staff are responsible for presenting a first class championship course that attracts visitors to the Hotel and Spa and increases the value of their stay. Having triumphed over the rigors of last winter, backed by Headland's strong technical support, their Course Manager is confident that they can cope with anything the weather throws at them. "So far conditions have been even harsher than last year," he says. "We've prepared in every way we can and now, we'll just deal with it as it comes."