0 Pugh-Lewis build pitches for schools of the Future 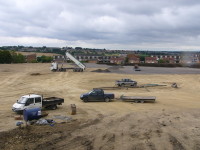 As part of the "Building Schools for the Future" programme, the national, government backed initiative to renew or re-build every secondary school in England over 10 to 15 years, five hectares of sports pitches and outdoor athletic facilities will be officially handed over to Meadowhead School in the south of the city.

J Pugh-Lewis, the Chesterfield based sports ground constructors and drainage experts who have been involved in both projects as contractors for Kier Build, (partners with Sheffield City Council under the scheme) put the final touches to the pitch surrounds at Meadowhead in the beginning of October having seeded the week before. 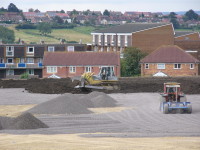 Tim Pugh-Lewis says that they had hoped to start construction at Meadowhead in February or March. "We were hampered by the weather," he recalls. "We actually started work in August. The new £20 million school building has already been built, but building contractors can build all year. Grass only grows in the growing season and we have to work around that."

Unlike the playing fields at Westfield, which were constructed on a completely new site, Meadowhead's five new pitches and athletic facilities have been built on a plateau, which previously housed the old school and the original playing fields. The subsoil, made up of excavation material and crushed demolition material is not the best and for this reason J Pugh-Lewis Ltd. needed to install a relatively high level of drainage.

"The topsoil had been removed from the surface and saved on site," Tim continues. "We installed shallow pipe drains and then a gravel raft on top. We've used a similar construction before in situations that demanded a higher level of drainage than the conventional piped system." 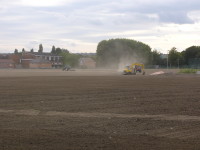 Due to the lateness of the season, J Pugh-Lewis also decided on a higher seed rate than normal. "Once we'd put back the top soil we seeded at a higher rate, wanting maximum grass cover in the shortest possible time," Tim explains. By mid October the cricket square had come through green and Alan Smith, Site Manager for Kier Build, said that according to the feedback he'd had from his Client Care Manager Steve Harris, the five pitches and athletic facilities looked great.

"The Kier Group has been actively involved in the Building Schools For The Future programme since its inception," he says. "Westfield took position of their outdoor sports facilities in January, started playing both rugby and football in February, and enjoyed the rest of the season. Judging by the way J Pugh Lewis have performed both here and at Meadowhead we consider the company a very good contractor."

For further information on the construction and drainage services of J Pugh-Lewis, contact the company on Tel: 01773 872362 or visit their website at www.pugh-lewis.co.uk