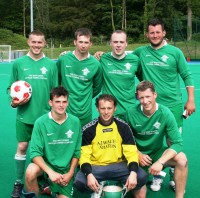 Pyrford Golf Club triumphed in a sudden death penalty shoot out to lift the JSM Cup. The final was a hard fought affair between the winner's and a team from Queenwood Golf Club, finishing 0-0 at full time.

David Cole, MD of Toro dealership JSM Ltd., commented after the Trophy presentation 'Once again our football tournament has been a great social event. We had great support from all our supplier partners on the day, with particular thanks to Lely UK (Toro) - without whom we couldn't have had such a successful event. We also commend all the teams for their commitment and passion which was evident throughout the matches'.

47 games of very competitive 5-a-side football, involving over 160 players and travelling fans led to the penalty climax. The presentations were followed by a BBQ which benefited from some unexpected late afternoon sunshine.

Pyrford and Queenwood made it to the final after prevailing over teams from The Berkshire and Dukes Meadow respectively in the semi-finals. In the group stages the teams from Dukes Meadow, West Hill and The Berkshire all emerged as undefeated group winner's, with West Hill keeping a clean sheet throughout the group stages. The Dukes Meadow team had the consolation of team marksman Jack Lofthouse lifting the 'golden boot' trophy as tournament top scorer.

Entry to the JSM Cup was open to teams of greenkeeper's, groundsmen and other turf and landscape professionals from around the south-east. First played for in 2008, the competition is held biannually.