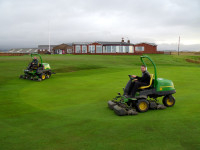 Appleby Golf Club's long-serving course manager Steve Campbell and his assistant Grant Dougherty do all the mowing on this 18-hole Cumbrian moorland course. Time is therefore at a premium, and anything that saves this precious commodity without compromising course quality is a real bonus.

So when Nigel Hurst of John Deere dealer Henry Armer & Son gave a demonstration of the company's new Quick Adjust (QA) cylinder mower cutting units to course managers in the area, Steve saw them as a highly practical addition to his armoury, and genuine time savers.

He already owned a John Deere 2500E hybrid electric greens mower, so he bought a second machine equipped with QA units from Armers. Impressed with their performance benefits, he also decided to upgrade the cutting of tees and surrounds by buying a new 8000 E-Cut hybrid mower.

"We usually do the adjustments in the shed, but the job can be done just as easily out on the course now," says Steve, who has been in charge of course maintenance at Appleby for 27 years. "All you need is a gauge and a drill. It's been easy from day one - anyone can do it.

"I reckon we save about an hour each time we make an adjustment, so over the year that's a lot of time saved, which we can spend doing other vital jobs around the course. Obviously the biggest time saving is at the beginning and end of the main cutting season when height changes are more frequent, but spring and autumn are when there's most of the other work to do anyway.

"Quick adjustment of the cylinders is a real benefit to us, especially because you don't even have to take the units off the machine, which used to be pretty tough sometimes."

Steve Campbell cuts the tees and surrounds twice a week during the summer and used to use a 72in triplex mower, but says his new 8000E is already giving better results. "I now get a wider 80in cut, and the five floating units tackle undulations so much better than the old machine," he says.

"Before, I had to lower the cut just to reach some parts. Now, I can keep the cut up and get a really good, consistent finish. Turning on the tees without marking makes the job so much quicker too - I love the 8000E's three-wheel manoeuvrability."