The popular SISIS Quadraplay began life in the late 1970s as the Truplay. Lynn Hilton charts the machine's progress into one of today's most useful pieces of kit in the groundsman's armoury

The SISIS Truplay comprised of a rake, lute, roller and brush and was designed for maintaining hard-porous surfaces, in a single pass. A wooden platform was incorporated to carry a line marker. The Truplay was designed with Local Authorities in mind, many of which had several school or park pitches to maintain within a relatively small area. The original concept was to speed up maintenance work by carrying out more than one operation simultaneously.

In 1986 the Truplay was redesigned to be suitable for turf playing surfaces as well as hard-porous. Now called the Trugoom, the new model comprised of a slitter, grooming rake, roller and brush to give a groomed, striped finish, but the brush could be retracted if a rolled finish was required. The dimensions and weight of the roller were carefully calculated to give hard-porous areas a firm surface, without over-compacting or crushing the top layer. 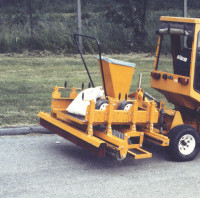 Over the next two years market demands brought further improvements, and the Trugroom was again redesigned to offer even more flexibility and a wider range of implements including lute, various rakes, brush, roller and spike-slitter. It was re-named the Quadraplay.

Four implements could be fitted to the mainframe in any order, were independently adjustable to achieve the desired effect, and each could be lifted out of use when not required. Implements were available with 6ft or 8ft working width. The design was kept simple using steel fabricated components to give a long, virtually maintenance-free working life.

By 1996 other implements had been added to the range for world wide use including the Diamond Buster for baseball diamonds and to break up neglected, severely compacted hard-porous surfaces. An intermediate rake, ZigZag brush, a sarel-type spiker called the Rolaspike, a seeder and a fine grooming rake were also added.

Responding to feed-back from customers, some of those additions have stood the test of time whilst others are no longer available. The current range offers eleven interchangeable implements enabling the grounds man or greenkeeper to choose the best combination for his particular requirements.
TwinPlay and SinglePlay frames are also available to enable the use of Quadraplay implements in pairs, or singly.

The most recently introduced implement is the Flexicomb, a rather interesting dual-purpose rake and brush. The poly-propylene bristles can be made stiffer or softer by adjusting the cross bar. Designed primarily for synthetic turf, the Flexicomb ensures even distribution of the infill and lifts the pile, without damage to the fibres, but the Flexicomb is also useful on natural grass, particularly golf greens. The Twinplay frame with interchangeable spiker-slitter, fine grooming rake, zigzag brush and roller is also a popular choice for golf courses.

Many race tracks, and particularly greyhound tracks, use the SISIS Quadraplay configured with rake, lute and a specially designed grader to de-compact and smooth the sand-based surface.

The SISIS Quadraplay multiple-purpose, one-pass maintenance system is now used all round the world for fast, effective grooming of natural and synthetic turf and hard-porous surfaces. One SISIS customer compared the Quadraplay to a Swiss army knife - compact, versatile and utterly useful.
The Victory Sports Ground in Bury St. Edmunds are still using a SISIS Quadraplay that they purchased in 1988.

SISIS was amazed when, in 1990, Mike Dee, Head Groundsman at a small independent school in Kent, ran the London Marathon to raise the necessary funds to purchase SISIS Quadraplay for the school.