I spent six years as the Head Groundsman at Roker Park, the former home of Sunderland FC, before taking up the Head Greenkeeper's position at the George Washington Golf and Country Club for fifteen years. 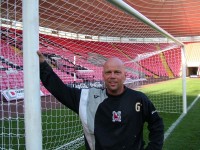 I enjoyed my term there developing the course and infrastructure but, for some reason, had a yearning to get back into football.

When the job at Darlington FC was advertised, in the summer of 2007, I knew that, if I got the job, I'd be taking a bit of a pay cut, but the thought of getting back into the game was too much to pass up.

And so, here I am. I took over the ground from the previous Groundsman, Andy (Tommo) Thompson, who has decided to concentrate on being the club's 'kit man' and Pitchcare's Dave Saltman, who had been helping the club in the interim period ... called the start of the season!

The pitch had been returfed that summer, so no renovations had taken place, and Dave had warned me that the west wing was holding a lot of water and needed more investigation.

Last season was a learning curve and I undertook a lot of hole digging to ascertain that the lateral drains on that side of the pitch weren't actually connected to the main drain. The water on one half of the pitch was, therefore, backing up from the drains and keeping the surface saturated. I was aerating the pitch on a very regular basis down to about 7" (175mm) but this only alleviated the water problems slightly and the wing continued to cut up badly during the season.

When digging down it was clear to see the original pitch construction and profile make-up. There are undersoil heating pipes installed, although we don't have a boiler or pumps for these to be connected to! Not only that, but the capped pipes are actually attached to sheets of corrugated steel under the surface.

The pitch is built on a gravel carpet, which is good, but the depth of rootzone is slightly too shallow. At best we have around 250mm, which is perhaps a few centimetres short of being the right depth. What this means is that the theory of a suspended water table isn't able to be put into practice, and the water doesn't get pulled from the surface quickly enough. 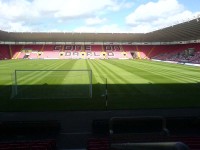 I installed some additional drains hoping that they would take some of the water away, but much of the time we had to rely on our rain covers to keep the rain off and get the games on.

In the close season I brought in White Horse Contractors to do the renovations and install a new main drain. The existing one was buried under the surrounding tarmac track and it would have involved too much work and money to connect the laterals into this pipe.

The work on the pitch involved removing 25mm of surface vegetation using the Koro, and then deep spiking the cleaned surface. 80 tonnes of sand were then spread across the pitch and worked into the vertidrain holes. Once the sand had been worked in, a further 60 tonnes of 70:30 rootzone were spread to finalise levels. The pitch was then disc seeded in a few directions using fourteen bags of R14 ryegrass mix, before dragmatting and then fertilising completed the renovations.

Due to the play off's, following a successful season for Darlington, renovations couldn't be completed until the end of May. This gave us just six weeks before an Elton John concert on the 5th July. I would liked to have turned the pitch over once and Koroed, but the short window of opportunity didn't allow us to disturb the pitch too much.

The new seed came up pretty quickly, but then this year has been a good growing year, hasn't it? I was back to cutting the pitch with cylinder mowers before I had to make way for the stage crews who took over the stadium. My last job prior to the concert was to spray the young pitch with Daconil which, I hoped, would keep any disease at bay while the Terraplas flooring and staging was in place.

After the concert the various crews descended on us like a plague of locusts, removing all staging, flooring and scaffolding in double quick time. There was a lot of damage, particularly at the stage end where the grass had died back in each of the light/sound tower areas. 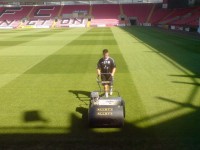 The first job was to sweep the pitch. Despite the use of flooring there was a lot of debris on the surface and I probably did 5-6 passes using my SISIS Litamina to remove all the rubbish. Once swept, I then started repairing the worst areas with new turf, brought in from Tillers Turf. I had about 60 square metres delivered as big rolls and it became a heck of a job, cutting off workable lengths and wheel barrowing them around to where I needed them. It took me a few days to complete the turfing, although by then I had also overseeded the whole pitch again with 120kgs of Advanta MM60 and sprayed with Chipco Green.

The first friendly match was only seventeen days after the Elton John concert, so the clock was ticking and there was no time to lose. My full time member of staff, Carl Allen, had taken up a post as an assistant at Middlesbrough's training facility, so I undertook all the work myself.

The pitch was fertilised before and after the concert using Marathon sport spring granular 16:4:8 to boost the plant strength, together with post concert sprays of Sherriff's SeaVolution to improve colour and health. I continued with regular aeration and mowing, cutting the pitch at 24mm for the start of this season.

We had three pre-season friendlies, which played okay and, with each passing week, the pitch continued to improve as the grass established nicely. The roots were going down well and, to date, the drainage work down the west side of the pitch has proved successful.

As we moved into this autumn, I changed my fertiliser over to Scotts Double K, a 7:0:14 feed that has a good balance to help the grass over the coming months.

I vertidrained the pitch weekly during the growing season (up until the end of October) and then monthly thereafter.

The pitch is usually cut with an Allett and the height of cut is raised for the winter to 27mm. The manager thinks he wants it shorter but, as the grass thins out, the pitch plays just the same as a very short one in the height of summer.

As I write this, at the end of October, I have just sprayed on some Amino acids and oversown with the new Barenbrug SOS; we'll see how that works. The divoting has got easier since the new drains went in and the roots, even on the shady west side, are still over 100mm deep.

I have fairly limited machinery, certainly compared to my days at the golf club, but I can survive on a Kubota tractor, spiker, sweeper, pedestrian sprayer, marker and a fertiliser spreader. I have a couple of people who come in to help me on the match day and, if there was anything too strenuous, the stadium maintenance guys will help (well, if push came to shove they would!)

I have built up a good relationship with the current manager, Dave Penney; he understands that a sound, level surface is going to help the team play a good passing game, so he doesn't abuse the surface. We only rarely have training sessions and there are no reserve games played at the stadium. In fact, with the exception of the 1st team, only the youth team play at the Darlington Arena in the Youth Cup.