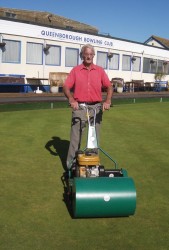 Queenborough is a private club, but the site and premises are owned by Swale Borough Council. It was founded way back in 1935. There was a feel-good buzz about the place when Neville Johnson visited it on a rare golden day in September to meet John. The green looked immaculate. The pity was, the playing season was all but over!

Whilst many bowls clubs seem to be struggling to attract new members, Queenborough has been increasing its membership year on year and there are currently eighty active players of all ages from 18 to 85. The game of bowls is far removed from the gentle image a lot of people have of it, John tells me. He likes the competitive edge, and the game's warm, friendly nature in equal measures. The club had just won the Island League title again to add to its bulging trophy cabinet.

As a young gardener for Orpington Urban Council, who went out to Australia as a twenty-one year old to take care of cricket pitches, his instinctive love of the outdoors was always going to be a lifelong thing.

"I used to do an hour's work on the pitch, then an hour in the sea. What a life it was," said John.

"In those days, they were all natural grass pitches - no artificials or drop-ins. You watered it and rolled it until it came up like a polished table-top."

The Dapto Club, just south of Wollongong in New South Wales, where John worked nearly fifty years ago, is just twenty-five miles or so from Bowral, where a certain Don Bradman played his club cricket. They demand pretty decent cricket surfaces in those parts, so John learned a thing or two about pitch care downunder. 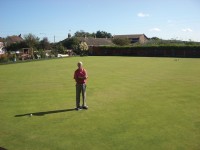 He admits he still yearns for those days, but family reasons bought him back to these shores, a return to Kent, and specifically a move to Sheppey. He had a spell working for Kent County Estates, which expanded his experience in playing fields upkeep, but it was work as a groundsman for Maidstone Borough Council that first brought him into contact with bowls - as a greenkeeper, and a player.

It was thirty-two years ago, he told me with precision. He had tried bowling one day after finishing mowing, and was spotted by the captain of a club who, being a man short for a match that night, drafted him into his team. He never looked back. The bug had well and truly been caught.

"I just seemed to have an eye for the game," said John," and very soon after I managed to beat a county bowler in a singles match."

When he first settled on the island, there was no one looking after the Coop Club green and he got involved with its upkeep. He later joined the Queenborough club and, soon after, the then greenkeeper retired and he took over. It was a natural succession. That was ten years ago. 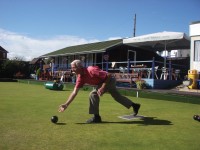 When he first took charge at Queenborough, the playing surface wasn't as good as it could have been. No criticism of his predecessor, but for all his hard work and zeal he didn't have the know-how, and many of the essential tasks were being neglected.

"Appearance, though important, isn't everything. It's how the bowls travel that counts," said John.

The green is a traditional bent and fescue surface, which John mows down to 4mm three or four times a week during the playing season. When play stops each October it is seriously scarified - probably three ways - so it is unrecognisable as a fine grass surface. If I came back in a week or two it would be a brown mess, he said. Spiking, topdressing, and reseeding with a bowling green mix John gets from Eden Park Turf Supplies of Sittingbourne follow. John tells me the mix is 40% chewings fescue, 40% slender red fescue, and 20% highland browntop bent. It is an intense period of work, for which there is no substitute, he emphasises.

"You simply must do this work in the autumn if you want a good green next spring," said John.

Over winter, the green will be brushed nearly every day to take away top moisture and help reduce the likelihood of fusarium. A 9-feet bristle brush dragged backwards and forwards across the surface does the job more than adequately. Mowing down to say 7mm will take place occasionally if there is growth. Another routine is

monthly spiking to maintain airflow to the roots. Vigilance for fusarium and the like cannot be overlooked and fungicide locally applied, if necessary. John tells me that such disease is happily pretty rare.

Bowling starts again at the end of April.

John is on the Bowls Committee, so has an influential voice regarding budgets - and its wise spending! Being both player and greenkeeper sets him apart from the other five on the committee when it comes to matters of green care.

Queenborough is an understanding club on such things, John tells me. Three seasons ago the club's mower had come to the end of its shelf life, so he began the search for a replacement. An ad in one of the trade magazines (it may have been Pitchcare, but he couldn't recall) caught his eye because of the low price. It was for Protea equipment. He called them and, within days, a range of their machines were in demonstration action on the Queenborough green.

John was so impressed that he bought three machines for the club - a mower, a groomer and a scarifier. They have been his armoury ever since.

"The groomer, pound for pound, is the best piece of kit I've ever used," said John." It removes all the debris and thatch and helps the normal re-generation of fine grass no end."

John uses the Protea groomer once or twice a week prior to mowing, and wishes it had been available to him years ago. Still, he's more than happy with the three he's had it under his belt. The difference it has made to the playing surface at Queenborough has been phenomenal, he says.

What is particularly striking about John's three seasons of using the South African made machines is that he says the need for servicing has been virtually nil despite regular, and sometimes heavy usage. Only the usual DIY oil change and annual clean-up have been necessary.

The green actually drains too well if anything because of its sandy base. Rainfall does not sit in a top layer with all the attendant problems, so John is lucky in that respect. Irrigation is necessary from time to time, and another piece of luck for John is the concrete water storage pit beneath the clubhouse, constructed during the war to assist fire fighting. This is regularly topped up by rainfall from nearby car park and road drainage. He utilises this free, on-tap water supply by means of a submersible pump which feeds water to the club's main tank and a sprinkler system fitted five or six years ago.

As we sit on the veranda overlooking the green - built last year for members and visitors - John proudly tells me how the club's playing surface is widely admired in the area. The county now seeks to use it more and more for matches, which is a useful source of income. This puts a bit more pressure on the greenkeeping side of his involvement, but there is a look of relish in his eye. He loves the hard work and the competitive pressure. Then, the playing side takes over and he steps on to the green, not to groom or mow, but to practice his backhand.

One of the club members - a real character, says John - always cycles there to play, even though he only lives two streets away. One day, he sat on the sidelines watching John at work and in a friendly way took the mickey out of the state of the green. He retired to the bar and, when he came outside again, became agitated because his bike was missing. Someone had run it up the flagpole. I wonder who?

Everyone laughed, including our cyclist bowler. Having fun always comes first for John Crouch and Queenborough Bowling Club.