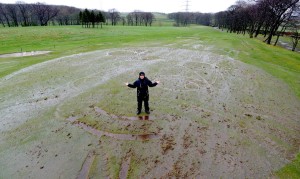 "Brainless idiots" on quad bikes have left a golf club facing a bill of up to £10,000 after badly damaging two greens.

Queensbury Golf Club near Bradford was targeted by three people on quad bikes on Saturday.

Club secretary Richard Guest said: "We are absolutely distraught. They have destroyed the third green. They have also damaged the second green. It could cost in the region of £10,000 to repair.

"The third green will have to be completely relaid. Both greens are out of commission and in two weeks' time the season starts."

The club's social and marketing chairman, Nigel Brunt, wrote on Facebook: "We would like to thank the brainless idiots who thought it would be fun to drive around Queensbury Golf Club on quad bikes causing serious damage to a number of the greens.

"Nearly 200 local people enjoy playing at the club and will now be penalised over the coming months due to this pointless selfish act! Not to mention how much time and money it will take the club to repair the damage."

Mr Guest added: "I would say the third green is out of action for a minimum of six months. I don't think we will play on it again this year.

"The second green, we might be able to play on it soon. They are rutted. They have been spinning around on them. They have rutted everything up."

"I am absolutely distraught, especially with all the hard work that has gone into the course by the groundstaff. It is soul-destroying."

Mr Guest said he was at the club when the yobs struck at about 5.30pm to 6.00pm and could see them from a distance.

A spokesman for West Yorkshire Police said: "Police are investigating a report of a small group of quad bikes causing damage to land at Queensbury Golf Club at about 5.45pm on Saturday."

"Officers are also aware of a number of other reports relating to damage caused to land by vehicles in the Tong and Wyke area on Saturday afternoon and these are being looked into to establish if they are linked."

"It is possible that these vehicles may have been caught on people's dashcams and anyone with similar footage which may assist this investigation is asked to contact the Bradford South Area Neighbourhood Team on 101, quoting crime reference 13170124827."