Q: I have noticed some areas of random leaf elongation, where individual leaf blades have become bleached white! What is causing this and how can I combat it?

This is becoming a more common sight in the autumn and during wet summers, especially on poa annua swards. The extension of the leaf blades upwards is known as etiolation and is known to occur in plants grown under low light conditions, on golf courses, it goes by a number of names including 'Ghost Grass' and Etiolated Tiller Symptoms (ETS). 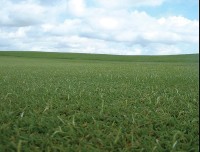 The condition is characterised by long, weak stems and smaller, sparser leaves due to longer internodes. Leaf blades are a pale yellow or bleached white, chlorotic colour, signifying a lack of chlorophyll. Etiolated growth usually occurs after a period of dry weather followed by conditions such as thunderstorms, rain or high humidity. It can be particularly marked on collars and approaches and the affected grass tends to flatten down rather than being removed by cutting.

It has been suggested (Kate Entwistle - Turfgrass Disease Centre) that etiolation may be a growth response to the presence of a hormone, produced by a Fusarium species of fungi, that may infect plants under such climatic conditions. If correct, it's likely this hormone is a type of gibberellic acid, associated with leaf elongation, but a type not controlled by plant-growth regulators.

Luckily, it does not affect the surface adversely and looks worse than it actually is. Sward density does not seem to be affected in most cases and the appearance lasts only for a week or so, depending on the weather pattern.

Q. I have been told that the high thatch levels in my bowling green are a contributory factor in the bad 'Dry Patch' we suffered this year. Is this true?

Thatch is described by the eminent plant physiologist James B. Beard as "A tightly intermingled layer of dead and living stems and roots that develops between the zone of green vegetation and the soil surface". 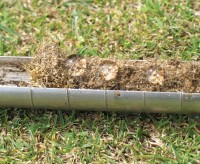 One of the main components of thatch is lignin, a long chain, lignocellulose polymer produced mainly from root matter, but it is also present in the shoots and leaves of grass plants.

Different plant species naturally contain higher or lower levels of lignin. For example, Red Fescue contains higher levels than Creeping Bentgrass which, in turn, has higher levels than Smooth-stalked Meadowgrass, and this characteristic is imparted to the fibre they produce. The higher the lignin content, the slower the rate of decomposition. This explains why Fescue fibre has a naturally tough feeling underfoot and why the surface is usually extremely firm. Lignin plays a crucial role in water transport in the plant and is therefore naturally hydrophobic (in order to move water about it must be waterproof).

This organic rich fibre layer, high in lignin, is extremely prone to dessication. A fibre layer with insufficient topdressing mixed through it will dry out far quicker than a soil/organic layer, and so localised hydrophobicity can be a distinct feature of thatchy turf.

This is demonstrated by the picture, which shows the classic 'beading' of water droplets placed on to a fibre layer. A lack of evenly distributed moisture in the surface causes localised dry areas and imparts stress of the grass, leading to wilting and a reduction in grass density. The increase in plant stress can also result in reduced plant health and increased susceptibility to disease.

The increased hydrophobicity makes thatch very difficult to 'wet up' after it has dried out and often water is shed from, rather than penetrating the surface.

Q. Soil cores have shown that I have areas of 'Black layer' in the soil of my push-up greens. I will increase my aeration programme where possible, but what other things can I do to help minimise it?

Black Layer in the soil appears as areas of black, foul smelling rootzone that can be small or large, deep or shallow. Mainly this is a deposit of iron sulphide that forms when hydrogen sulphide gas (the reason for the foul smell) reacts with iron in the soil. Hydrogen sulphide gas is toxic to grass plants and often prevents the formation of a good root system, which has a knock-on effect by increasing plant stress levels as the roots are concentrated near the surface.

Whilst iron can be found in most soils, hydrogen sulphide gas is only found where sulphur-reducing bacteria (SRBs) are present. SRBs can only survive where the soil has sufficient organic matter and water present. Most importantly, they can only live in anaerobic conditions (that is, soils with a lack of oxygen in the rootzone), and where soils have an abundance of sulphur.

Good aeration and drainage will help to combat Black Layer, but there are one or two other processes that can help to rectify the problem when used in conjunction. The sulphur-respiring bacteria use sulphur and sulphates as a food source, just as humans use oxygen. Minimising the input of sulphur in fertilisers can help to lessen the effects of Black Layer. High levels of sulphur are present in some products as they may include ammonium sulphate, potassium sulphate, iron sulphate and others. To reduce the net amount of sulphur in the soil, low sulphur fertilisers can be employed. Our research has shown that sulphur is highly mobile in a sand-dominated rootzone and it follows that, if sulphur input levels within the fertiliser regime are reduced in conjunction with targeted aeration to increase soil oxygen levels, the situation can quickly be rectified.

Research has shown that nitrate based fertilisers are also beneficial as they introduce chemical oxygen (and no additional sulphur), which increases the oxygen level of the rootzone. The effect is temporary however, as gradually the nitrate will disappear from anaerobic soil through a process called denitrification, where it is converted to nitrogen gas. Therefore, this method for diminishing black layer requires a "spoon feeding" approach using frequent, light applications of nitrate.