In the first of a regular series, Mark Hunt, Technical Director for Headland Amenity, answers some common questions.

1. I am getting purpling on my greens, what is causing this? 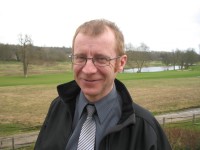 This phenomenon occurs nearly every spring, and sometimes in the autumn, and is prompted by a particular type of weather pattern, that of rapidly fluctuating day and night temperatures or a period of cold weather after a period of mild weather, such as we experienced at either end of March. Often it is misdiagnosed as phosphorus deficiency or red leaf spot, but it is not likely to be either.

Anthocyanin is the pigment responsible for the red, purple and blue colours in flowers and is most notably expressed in the glorious autumn colours we are all familar with. 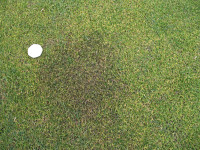 During the fluctuating temperatures of a typical spring, the grass plant produces sugars in the leaf during the warm, bright days, however, it is unable to translocate these down the plant at night because of the cold temperatures. These sugars then accumulate in the leaf and bind to anthocyanin.

This process causes anthocyanin to temporarily displace chlorophyll as the dominant plant pigment.

Not all grass plants demonstrate this effect and, if one looks across a close mown golf or bowling green, the effect appears in patches linked to the distribution of specific Poa and Agrostis biotypes across a sward.

In my experience, it tends to be linked more with the perennial Poa annua var reptan biotypes than the Poa annua var annua biotypes. It is also more likely to be expressed on areas that exhibit the greatest temperature fluctuations, i.e. the more exposed the turf, the more likely the effect will occur.


Looking at the plant leaf closely, you'll note that the purpling is confined to the upper, more-exposed surface of the leaf. Turn it over and it's green on the underside.

A few days of good settled growth with adequate fertility will ensure it disappears as fast as it appears, either way, it does no harm to the grass plant. 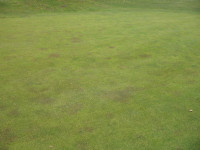 2. What's best for nutrition from March to May, Granular or Liquid Feed ?

March to May is the weather period with the most variation in growth through the year, I call it the 'T-Shirt to Thermals' period.

The last two weeks of March provided a good example of this with temperatures varying from -2OC minimum to 16OC maximum during the same day!

My general rule is to mix granular and liquid fertilisers through this period and not to put all my eggs in one basket.

During periods of low pressure (that usually originate from the west/south-west), we typically have sunshine and showers with the rain falling at 8-12OC, maintaining the soil in the same temperature range.

When this occurs I use granular fertilisers with a 'fast start', immediately-available portion based on ammonium and/or nitrate nitrogen, e.g. derived from ammonium sulphate and/or potassium nitrate.

During periods of high pressure, when typically we can start the day in frost, but temperatures can peak well into the mid-teens, as they did in March, the soil temperature tends to remain stubbornly low and so response from granular, soil-applied fertilisers can be slow.

The requirement for nutrient by the grass plant is also low during these weather phases and, therefore, a foliar-applied (maximum water volume 400 litres per hectare), liquid 'tonic' can pick up growth and colour nicely, without being affected by the low soil temperature. Again, I utilise ammonium and nitrate-based nutrient sources, tank-mixed with a light rate of iron, particularly if any of the previously-described purpling is apparent.

3. I have seen fairy rings on my greens. Surely they can't be active at this time of year?

The simple answer is yes, they can. The fungi responsible for causing the symptoms associated with fairy ring and 'Thatch Collapse' appear to be able to grow at very low soil temperatures <6OC. I've observed active fairy ring and particularly thatch fungus in December, January and February of most years.