The R&A has "privately decided" that Trump Turnberry will no longer be part of the Open Championship rota, according to a report from The Independent 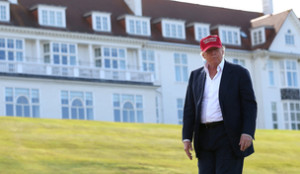 Donald Trump first raised the ire of golf's governing bodies in June for his inflammatory remarks about Mexican illegal immigrants, and was rebuked in a joint statement from the USGA, LPGA, PGA of America and PGA Tour.

On his final day as R&A chief executive in September, Peter Dawson called it "absurd" that "something somebody said on the political trail in America" would have any impact on the rota. "We have other priorities," Dawson said at the time, "but that's for a future committee to judge."

But Trump's latest stance - the banning of all Muslim immigrants to the United States - appears to have changed matters for the R&A, now led by Martin Slumbers.

With respect to Trump's initial comments about Mexican immigrants and new comments about Muslim immigrants, one anonymous R&A member told the Independent: "Those who forecast worse would come, including warnings from our American cousins, have been proved correct."

Other sources told the Independent: "One word was thrown around: Enough," and that the 2020 Open "will not happen here. Turnberry will be back. But perhaps not Trump Turnberry."

For the full article, visit www.golfchannel.com.