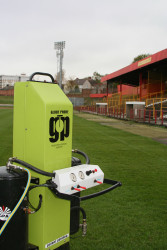 Saltex regulars will be well aware that R&K Kensett are often first with the latest developments in a particular field; the Graden Linear Aerator and then the Sand Injector along with the Gwazae Deep Aeration systems were all brought into Europe via the Surrey based contractors and distributors. "I'm always on the look out for something new that can make a difference in turf care." Explained Keith Kensett who continued, "Australia and New Zealand have proved to be very fertile what with Graden and Gwazae; and now I've come across the Enviromist Sprayers."

Enviromist is the latest innovation from the Kensett stable and claims that 'Full payback is possible within two years depending on frequency of use and spraying." Enviromist is the only sprayer in the world that incorporates both a low and high volume system that enables massive timesavings with the low volume option. For example a full 18 golf fairways can be sprayed with just one tank.

"The Enviromist has all the hi-tec options that you would expect to find on a sprayer; such as a low profile and contour following spray boom, a low compaction footprint, application management and output recording - everything that you need really." Said Kensett. The key to the efficiency of the Low-Volume operation lies in the Controlled Droplet Applicator (CDA) that generates droplets via a spinning disc rather than a pressure nozzle.

The savings available to users of the Enviromist were emphasised by Toby Washburn - Superintendent at Ponte Vedra; "I used to apply 2,600 gallons to my 35 acres, now it is 52 gallons to do the same job but better - savings are around $20,000US per year." Washburn went on to explain that he saves around 70% on herbicides and that he considers it the best unit on the market - something to consider in our environmentally sensitive market.

The production of the Enviromist follows seven years trans-Pacific design and testing in the USA and Australia and was developed with the aim of allowing the Enviromist to work in conditions that would not allow for spraying with conventional equipment. A 30-degree articulation system on the spray wings allow for a contour hugging action that is ideally suited to golf operations. The option of a 300, 500 or 800 litre tank is coupled with a handy hose reel and spray wand for spot spraying - thus furthering the utility of the Enviromist.