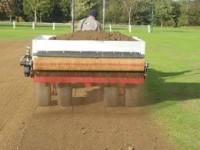 The race is on to complete northern cricket pitch renovation while the weather holds and new grass can become established. From Chesterfield to Wharfdale and Barnsley to Scarborough, county, league and premier league clubs are all preparing for next season.

Alan Kettleborough, a pitch adviser for both the English and Yorkshire Cricket Boards has been working with Wigginton based Seward Turf Maintenance on wickets at Chesterfield, Barnsley and Poole in Wharfdale. "Both Chesterfield CC, playing in the Derbyshire Premier League and Yorkshire League players Barnsley CC had saddles at the ends of their squares," reports Alan. "At Chesterfield water was standing in the centre of the pitch, there was layering in the soil on the square, and no consistency when it was rolled out." 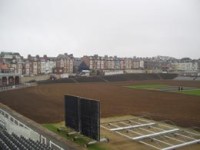 Barnsley's ground at Shaw Lane had a difference of 4inches in places from the middle to the end of its 18 wickets, which meant that the Koro had to go down to 35mms. The team, who completed the job in 3 working days, re-laid with G S B Kettering Loam before over seeding, and an even cover of grass came through after 16 days.

Poole CC in Wharfdale, just north of Leeds needed 3 new practise wickets at the edge of their square. "We dug them out, 75mms deep and filled them with Ongar Loam before re-seeding them," reports Kettleborough.

Alan was hoping for a few warm days at the end of October (04) to ensure new grass growth. "We've had a problem with the weather this year," he confides. "It's not been kind at the back end and you've just got to be patient. People see you putting down grass seed and they expect it to come up immediately." 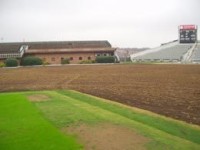 One person who's keeping a close eye on the progress of his new grass is Cecil Snell, Chief Executive of Scarborough CC. "The last time we had major renovations on our outfield was in 1876," he says, "although we've been a county ground for around 130 years. At the moment we're in the process of compiling a roll of honour and our first records show Emmett taking six wickets in each innings against Middlesex in 1874.

We've sprayed it all, applied a total weed killer, stone buried and softened the gradient to make it as level as possible," says Mike Seward, Seward's MD. "The club chose a seed mixture of sports turf perennial ryegrass, tall fescues, and bents, and once this was established we came back and cambridge rolled."

By the third week of October (04), Scarborough's outfield was just showing signs of green.

For further information on the services of Seward turf Maintenance contact the company on Tel: 01904 765949