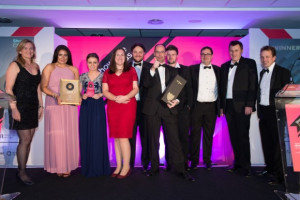 With 13 Awards in total, the Showcase Awards celebrate excellence and innovation on British Racecourses in improving the customer experience. Held at Doncaster Racecourse in November, the 2016 Showcase Awards was the seventh annual Showcase event and partnered for the first time by Moët Hennessy as well as Racing Post.

The 2016 Showcase Awards enjoyed record numbers, with 258 guests attending. This included 41 of the 59 RCA member racecourses, a record number for engagement.

2016 attracted 77 submissions from 41 racecourses, equalling the second highest engagement level to date and an increase on 2015.

The Awards also attracted VIP guests from the wider world of horseracing, including Chairmen and Chief Executives from the British Horseracing Authority, Horsemen's Group, ITV Sport, and VisitEngland.

The event is now firmly in place as the recognised racecourse industry awards and this year's feedback was particularly impressive.

100% of attendees stated that the themes of the Showcase event was appropriate to their racecourse and 92% agreed that the range of Awards offered reflected the modern day operation of running a racecourse.

Stephen Atkin, Chief Executive of The Racecourse Association, said: "We are absolutely delighted to be shortlisted for the European Association Awards 2017.

This year's Showcase Awards were hugely successful with record engagement levels and this is a great reward for all the hard work that the RCA team and the racecourses put into the Showcase Awards every year."

"It's fantastic to be recognised amongst our European contemporaries and we look forward to meeting our fellow Finalists in February."

Claire Wormsley, Managing Director of Global Conference Network, said: "The response to these awards have been extremely impressive with entries from all types and sizes of European associations entering."

For more information please contact Will Aitkenhead - will.aitkenhead@racecourseassociation.co.uk or 07917 127 302