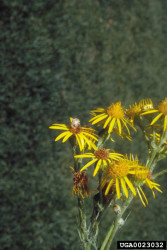 It's a topic we have covered before but, this year's wet summer has seen an increase in Common Ragwort and its inherent dangers. Although all landowners are meant to control it they rarely do. And, to make matters worse, it is ecologically important.

Common Ragwort is a native plant and over 200 species of insect and other invertebrates have been found on the plant in the UK. So, it is important ecologically. The flowers are among the most frequently visited by butterflies in Britain. It is a weed of wasteland and pasture that occurs in every county in the UK. The natural habitat is sand dunes but it is prevalent on light, low fertility soils and on grassland that is overgrazed.

Common Ragwort is usually a biennial plant - that is, in its first year it forms a low rosette of lobed crinkly leaves, and doesn't flower. In its second year the leaves die back and it flowers in summer, producing a large cluster of small yellow daisy-like flowers at the top of stems up to a metre tall. Many thousands of fluffy white seeds are produced which are dispersed on the wind, and then the whole plant dies. If the flowering stem is repeatedly cut back it can survive in the rosette stage for a number of years.

It frequently infests horse pastures and is often seen along roadsides, railways and on rubbish tips. It does not tolerate regular soil cultivation and is rarely a problem in arable fields. It is not found on acid peaty soils. Marked fluctuations can occur in Ragwort populations and plant numbers may suddenly increase or decrease for no apparent reason.

Sometimes a population of uniform age may all flower, mature and then die. It has been suggested that a decrease in Ragwort may be associated with very dry summers. Although all landowners are meant to control it, they rarely do, so it keeps on spreading. Toxic alkaloids are present in all parts of the plant and it regularly causes loss of livestock through liver damage.

It is specified in the Weeds Act, 1959 and the Ragwort Control Act 2003. Cattle and horses usually avoid Ragwort when there is adequate grazing but newly turned out stock may eat it if hungry. Sheep are partial to it in the young state and appear to be more resistant to the poison than cattle, but they are not immune. The presence of Ragwort in hay, silage or dried grass is the main source of poisoning. Drying or similar processes do not affect the poisonous properties. Wilted plant material is more palatable to stock than the growing plant, but equally toxic.

The flowering period is long, starting in mid-June and continuing until November, being especially prolonged if plants have been damaged in the first flush of flowering. When allowed to flower and set seed Ragwort is biennial. If it is defoliated it behaves as a perennial.

Common Ragwort will only flower after exposure to winter cold but rosette size is also important as plants must attain a threshold size and this may take more than three years. The threshold size varies among populations. Flowering also depends on conditions in the spring after vernalisation. When flowering finally occurs it may be quite extensive. The flowers are insect pollinated. Early ripening of the anthers favours cross-pollination. 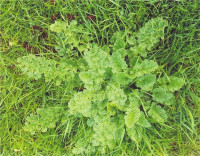 many populations the yellow flower heads consistently have 13 ray florets, while in others the number varies between 8 and 12 The average seed number per flower head is 70 but the number of flower heads per plant can range from less than 200 to over 2,000. A single plant can produce 150,000 seeds. The seeds may begin to ripen in July/August but are shed chiefly from September onwards. Viable seeds can be formed on cut down flower stems if the flowers are open when severed.

Two types of seed are produced in a flower head, each with different germination characteristics. Seeds from the disc florets at the centre of the flower head are lighter and have a pappus of hairs to aid long distance dispersal to new sites. The disc florets around the edge of the flower head produce heavier seeds with thicker coats and no pappus. These remain in situ until shaken free and fall close to the parent plant. They remain dormant in the soil ready to germinate when the parent plant dies and leaves a gap in the vegetation. It is sometimes difficult to determine whether a young plant has grown from seed or from the root bud of a plant that has died or been pulled up.

Seeds buried deeper than 4cm in soil can remain dormant for over 16 years. Extremely high seed densities have been reported to accumulate in the soil. Seeds in the upper layer of soil die within 4-6 years and seeds in cultivated soil persist for less than 4 years. Ragwort is deep rooting and can regenerate from its roots if these are not completely removed but the invasion of clean pasture is primarily by seed.

Seeds from the disc florets are carried up to 72.5m by the wind. In wet conditions, however, the seed heads remain closed and the seeds are not shed. Ragwort seeds may also be dispersed by water. Initially the seeds float, then sink but float again as they begin to germinate. Common Ragwort seed can be dispersed in hay and has occurred as a contaminant in crop seeds. Birds may eat the seeds but viable seeds are rarely found in bird droppings. Seeds that are eaten by sheep pass through the digestive system undamaged.

In the UK, The Ragwort Control Act 2003 has led to the provision of a code of practice, published by DEFRA, that gives guidance on preventing the spread of Ragwort in situations where it is likely to be a danger to horses and other livestock. The code does not seek to eradicate Ragwort but only to control it where there is a threat to the health and welfare of animals.

Guidance on the disposal options for common Ragwort has been prepared to supplement the advice given in the Code of Practice and should be read in conjunction with it. The British Horse Society has been at the forefront in campaigning for effective ragwort control policies. Last year the society initiated the Ragwort Control Private Members Bill currently before Parliament. If passed, it will give DEFRA powers to make a Code of Practice to provide statutory guidance to landowners on how ragwort is to be controlled. This will dramatically strengthen current legislation. 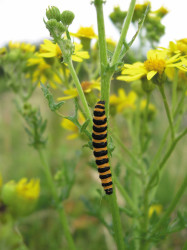 razing to maintain optimum sward height can also help. Plants are weakened by winter/spring grazing by sheep, but there is some risk to the animals on heavily infested fields. Seed set, in particular, is reduced because sheep graze the young rosettes and prevent flowering. Sheep grazing should be practiced only at the rosette stage, with a low infestation rate and other herbage available. Poultry have been seen to scratch out and eat the Ragwort rosettes down to the roots but there is rapid regeneration.

Mowing is, at best, a short-term measure to prevent seed production, in reality it causes plants to perennate and persist. Pulling is more effective but is only feasible for small infestations and regrowth can occur from detached roots left in the soil. Mechanical pulling with an 'Eco-puller' is possible when the flower stem has elongated and there is sufficient height difference with the crop. Pulled material must be disposed of safely. Ploughing, and the introduction of an arable rotation, is the most effective method of control in heavily infested pasture. Grass may be resown after a period of annual cropping but direct reseeding will often result in a rapid re-infestation. Reseeding is best carried out under a cover crop. The presence of clover and adequate phosphate levels are said to discourage Ragwort establishment.

Caterpillars of the cinnabar moth (Tyria jacobaeae) feed on Ragwort in June-August and may weaken or even kill a plant before it can seed. The caterpillars are themselves attacked by several different predator insects that can have a drastic effect on their numbers. Ragwort numbers in the previous year may also influence cinnabar moth density. The caterpillars are likely to have the greatest effect on Ragwort when summer rainfall is low and the regenerative ability of defoliated plants is reduced by moisture stress.

The Ragwort seed fly (Pegohylemia seneciella) and the root-feeding flea beetle (Longitarus jacobaeae) are considered potential biological control agents for Ragwort. In the UK, the beetle has caused severe damage to Ragwort. The larvae attack the root crown and feed externally on lateral roots. This may result in defoliation of the weed but does not necessarily reduce the plant population except where plants are under stress. In areas of the UK where the flea beetle and cinnabar moth occur together there are still large populations of Ragwort. Various rust fungi and other pathogens also infect Ragwort but do not cause serious injury.

Selective Herbicides containing 2,4-D will provide control of this weed if applied at the Rosette growth stage. A repeat application may be required at this stage before the stem develops.

Barrier H - Contains 22.9% Citronella Oil. It will destroy Ragwort in record time; designed as a spot spray treatment, it can be used all year round, even in winter. Applied to flower heads, it will stop the seeding process.