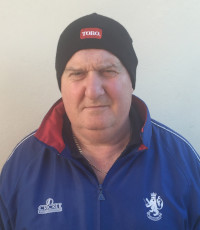 When the River Tyne burst its banks at Hexham, Northumberland last December, pretty much the whole of the course at Tynedale Golf Club was flooded. The clean-up process has been slow and laborious, as greenkeeper Kevin Thompson explains, but help has come from all quarters

Tynedale golf club is a small, 9-hole parkland golf course on the banks of the River Tyne at Hexham in Northumberland. It is a council run facility, and has been for many years. Kevin Thompson, who is employed by the council's Neighbourhood Environmental Action Team (NEAT), is the sole greenkeeper.

He left school at the age of sixteen and started work immediately at his local course, Prudhoe Golf Club in Northumberland. Whilst there, he studied greenkeeping and sports turf management at Kirkley Hall College in Ponteland.

Shortly after passing his exams (in 1984), he left Prudhoe to work as a groundsman at the Queen Elizabeth High School in Hexham for Northumberland County Council. When, three years ago, the job of greenkeeper came up at Tynedale, due to the then greenkeeper retiring, he was advised by his NEAT team leader to apply. And, after the winter just gone, he could be forgiven for wishing he hadn't bothered when the course was ravaged by severe flooding in December.

Three and a half months later, the course is only just beginning to recover, as Kevin explained to Pitchcare.

"On Sunday 6th December 2015, after days of continuous rain, the Tyne completely burst its banks at Hexham. Over ninety percent of the course was completely flooded, along with sand, silt and plenty of other debris that the Tyne was throwing out.

By Monday, some of the water had gone down, although there was still two feet of water covering much of the course. Where the water had once been now lay a thick layer of sand, silt and debris all over the place; on the greens, fairways, tee boxes, everywhere. The silt on some of the greens was up to nine inches thick in places, and up to two feet deep in some of the valleys in the fairways and semi rough. If this wasn't enough, the Northumberland County Council (NCC) depot at Tyne Mills Industrial Estate in Hexham had been completely flooded out. They had lost all their offices, whilst the sheds where all the grounds equipment, and some of the golf course equipment, was stored had been totally flooded. All vehicles, including grass cutting machines, had been lost to the floods. They were all contaminated and of no use now.

The only machinery that I had left was a small John Deere 3320 tractor, with an equally small front loading bucket, and a John Deere 3320A greens mower which was, at the time, parked up at the course. I also lost a Jacobsen Tri King 1990D and a Jacobsen LF3800 fairway mower, which had only recently been purchased. Other gear, including spikers, scarifiers, verticutting cassettes, hand mowers, topdressing and fertiliser were all gone.

The then captain, Arnie White, phoned me on Sunday to tell me the course was flooded and that, when the water had gone down, it was going to be a big job to remove all the detritus from the course. 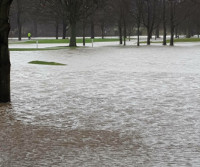 The scene that greeted me on Monday morning was one of utter carnage and a complete disbelief in what I was seeing. There was water all over the place, silt and sand laying thick on the greens and fairways, whilst debris from the river was snagged around many of the trees which line the course.

I normally work totally on my own, but if I ever need any help I can call on my senior NEAT team leader Geoff Cairns. He told me straightaway that, until things got better, I could have NCC chargehand Rob Wilson to assist in removing everything.

The golf club also rallied round and a working party was set up, comprising mainly of senior members, ladies member Sally Weir, and even the vice captain from our neighbouring course, Michael English, turned up to help.

We started on the greens. With the amount of sand and silt on the greens, and with a total lack of machinery, I knew this was going to be long job. Not, at this time, did I realise quite how long though.

After we managed to get all the sand and silt off the greens, Arnie White approached our neighbouring club, Hexham Golf Club, to ask them could they give us any advice or assist us in starting to remove the mountains of sand off the fairways. Course manager Malcolm Latham and his first assistant David Thompson came down and assessed what could be done. The first thing Malcolm said was that the greens needed to breathe and that he would bring down their Toro ProCore 648 and spike them all for us. This was a fantastic help.

What was also a massive boost was that David brought the rest of his greenkeeping staff down and they started removing sand from the tee boxes. This went on for several days. The golf club cannot thank these lads enough. 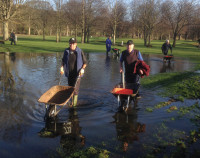 The clean up continued over the next few weeks. Progress was slow, at best. The working party were brilliant, but the total lack of machinery made the going hard. All the sand had to be taken to the banks of the Tyne with a wheelbarrow or in the small tractor bucket we had.

The new year came and went and things didn't change much. Each day we were still removing sand and silt. Then, in mid January, after a site visit from my senior team leader, he suggested that we needed help if we were going to make any significant progress. He went away and, after several phone calls, a Bobcat with an angled brush attachment was hired in to help us. This made the job of removing the sand and getting back down to grass level a lot quicker. However, there was a lot more sand on the course than we had previously thought. The Bobcat was hired to us for over three weeks and made progress a lot quicker, but getting rid of the sand from the course was still slow. The water had also washed the sand out of all of our bunkers. As a result of Arnie White having a conversation with John Thompson Snr of Thompsons of Prudhoe, he was 'persuaded' to donate forty tonnes of sand totally free of charge. Again, the club were grateful for this act of kindness.

We set about edging all the bunkers and loading sand into the bunkers but, again, with only a small front loader and the course still very wet, we had to pick our times to do this carefully - another three weeks gone!

As we moved into March (at the time of writing), the course seems to be recovering, albeit very slowly. Jobs that would help its recovery, like spiking the greens and fairways, spraying the greens and topping the fairways and tee boxes cannot be done because we simply have nothing to do them with. Only time will tell if the lost machinery will be replaced. 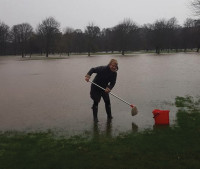 As I said earlier, I mainly look after the course on my own. Rob the chargehand comes in every ten days to cut the semi-rough, which is a great help.

My thanks go to my NEAT team leader Geoff, who always listens when I am moaning on to him. He does try to help with all the things that I ask for but, with council budgets being what they are, his hands are often tied. Also to Rob for his efforts and support which helped get us through this difficult time.

Thank you to the seniors, who came down on a regular basis, regardless of the weather, and the ladies section who helped with the removal of the sand and, more recently, have pruned all the suckers off the base of the trees. To chairman Brendon Murphy, the then captain, Arnie White, and the rest of the committee for all their help and understanding of the situation we found ourselves in. To the greenkeeping staff from Hexham Golf Club and, finally, Tynedale Golf Club as whole for being so understanding of our unprecedented predicament. What the future holds for Tynedale Golf Club in 2016, I do not know. I believe that the course, over time, will recover and the club will be able to move forward. These last three months have been the most stressful I have had in my working career. However, I think we have turned the corner and we can see light at the end of the tunnel.

At the time of writing, we are four weeks away from our new captain's drive in and still only have a greens machine to cut grass - nothing else!"

Kevin will be updating us on the progress he has been able to make in a forthcoming issue.