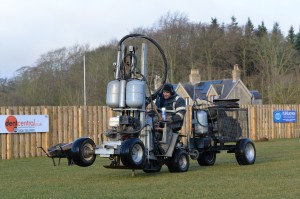 Scottish football clubs began to be formed in the late 1860's making Duns Football Club in the Scottish Borders one of the earliest teams, with suggestions it may have existed by 1874.

Today's club was re-elected to the East of Scotland league during the pre-season of 2011/12 when it achieved a sixth place finish and reached the final in the South Qualifying Cup. All was not well though with the pitch at the Old High School, where the club had acquired a permanent home.

Converted from a hockey pitch in September 2014, serious compaction had led to waterlogging, rendering the ground unplayable and resulting in all games being played away. Verti-draining and shock waving the pitch had little effect so Head Groundsman Scott Poole and Chairman Colin Pike sought an alternative solution from Terrain Aeration in February 2015. The company's Terralift was brought in to break through the compaction plate.

The Terralift's probe is directly in front of the operator who can watch each probe insertion and resultant shot. He can see if the probe is taking a long time to hammer into the soil to one metre depth, aided by the JCB road breaker gun. In Duns' case the ground was like concrete, as can be seen from the photograph of the Terralift at work.

Once the probe has reached one metre, the operator fires the system which releases an air blast and injects dried milled seaweed on the tail end of the blast. This is one of the reasons the Terralift treatment is so effective. Over a period of time the dried seaweed expands and contracts with the moisture content in the soil and this movement helps to keep the airways open.

To assist the long term aeration process the probe holes are backfilled with an aggregate, which is inert and porous as well as being mower friendly, rather than pea shingle which could destroy mower blades. The operator uses two metre centre spacings on a staggered grid pattern, a proven practice whereby the soil is fractured and fissured and each shot connects with the previous surrounding shots.

The club had taken photographs of the water ponding, where it would lay for a considerable time, and these helped pinpoint the areas needing treatment. Once probing began the club's onlookers witnessed two metre high spurts of smelly, anaerobic water come flying out of the probe holes, showing that water was sitting beneath the surface where it can rot the grass roots and cause further damage to the pitch.

This is where the seaweed acts by swelling and allowing surface water to drain down the fissures created by the Terralift. "The work has been so successful," says club chairman Colin Pike, "we played our first game on the pitch within seventeen days and won the match.

There was concern, after five months under water, there would be a lot of damage to the surface but it played like a normal pitch and we're looking forward to the eleven home games we have left to play this season."