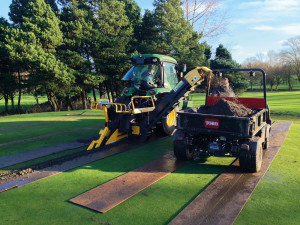 Low Laithes is an eighteen hole, parkland course designed by the legendary Dr Alistair Mackenzie. Golf was first played on the course in 1925 and it has developed over the years into a challenging test for golfers of all abilities.

The course is undulating, without being hilly, and has a variety of outstanding features which make every hole different.

The par 3 holes, though not excessively long, are demanding, as is the final, par 5 hole, a test for the most accomplished golfer. Tight, tree lined fairways, open ditches and well placed bunkers are designed to examine a player's technique and club selection.

Set on the Pennine rim of West Yorkshire, Low Laithes averages high rainfall and handles most of it, except on the second hole of the 18-hole parkland course, which stretches along a valley bottom.

Courses needn't have every hole underwater to make them unplayable. Just one flooded fairway can wreak havoc with the golfing calendar.

"The beck (stream) running along the left hand side of the fairway can turn into a river after heavy rain, flooding the hole, making it unplayable and forcing us to leave just the back nine open, or close the course completely," explained Head Greenkeeper Steve Dutton.

Seeking to rectify the problem, Steve and his greens team excavated three large holding ponds among rough along the right side of the fairway to take the runoff, all linked by underground pipes. 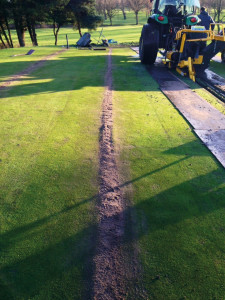 "We thought that would do the trick," says Steve, "but we realised that the existing drainage underneath the fairway was inclined incorrectly. Water was still not channelling into the holding ponds. To the eye, everything looked fine, but that was misleading."

Steve called in Chappelow Sports Turf to take a look at the problem and suggest a solution. Using laser guided specialist equipment and machinery, they cut trenches across the fairway to take 100ml diameter pipes at 4m centres, all linked to the holding ponds.

"This was a big job, but the contractors had the capacity to handle it comfortably, applying their powerful tractors and trenchers to complete the work in only a fortnight," commented Steve.

"Now, when it chucks it down, the second fairway is probably the driest one of all. The ground contours will always mean that the hole can gather water in severe conditions, but it drains away so quickly that there is no longer an issue about whether to keep the course open."

The success of the work prompted Steve to call in the contractors once again last December to address drainage issues on six of his wettest greens. "These were not in use in winter - members had to use temporary ones, which was not popular," he notes.

"After discussing the problem with Alan Chappelow, we decided the best option was to lay parallel drainage across the greens to drain water into existing pipes laid along the surrounding contours."

Following advice from consultants, it was recommended to lay 80ml diameter pipes at two-feet depth in 100ml diameter trenches at 2m spacings, overlaid with a 70:30 rootzone mix. 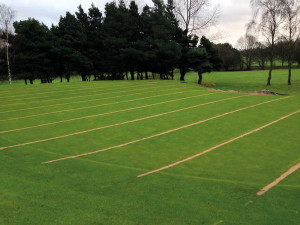 Using their own specialist chain trencher for the task, the work on the six greens was completed in as many weeks, ensuring the course was ready in March for the new season.

"We bought in bents and fescues turf and cut it in 100ml wide strips to cover the exposed rootzone," adds Steve, "rather than reseeding, because temperatures were still too low at that time of year."

After only two weeks, the greens were back in play. "I had feared that the greens would dry out, but everything has worked well. The drainage lines will be visible at certain times of the year as our greens are mostly Poa Annua, but these will fade with overseeding and topdressing."

"The greens face their sternest test this winter," says Steve. "They will still flood when it rains very heavily, but surface water will drain away within half an hour and that's a major improvement."

Together with additional drainage under fairway approaches, Steve believes that the club will be able to offer its members golf throughout the season - in a region renowned for heavy rainfall.