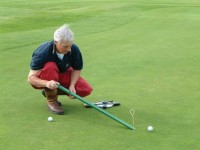 This is the case study of a golf club that STRI first became involved with in 2009. The club engaged us because the greens were falling well below the members' level of expectation. Something had to improve or there were going to be ructions ... as you might imagine.

I don't want to name the club because it's not important, but it is a members' club that was established in 1909 and is parkland in nature. I feel that it is, potentially, one of the courses of higher standing in the area and the members demand "certain standards". I wouldn't say that there is an unreasonable level of expectation going on, they just want to enjoy themselves. It certainly is a lovely place to spend a few hours enjoying the game of golf.

This club had received independent agronomic advice in the past, but it was not helping the greenkeepers to achieve the desired standards. Consequently, STRI was called in during the summer of 2009 to try and help. To complete the picture, there was a terrifically supportive, newly appointed Club Secretary who was solely focused on improving the situation. The greenkeeping team were highly skilled and experienced but, in recent years, they felt undermined and their confidence was very low. Our job was to assess the situation, define our targets, agree the plan with the greenkeepers and then communicate it to club officials, the committee and wider membership.

The initial site visit was carried out in September 2009 with the club's centenary summer having largely been washed out. Our first job was to try and pick the greenstaff up off the floor and get them back on track. There wasn't a problem in this regard and we "hit it off" immediately.

The assessment of the greens focused on measuring the actual playing qualities and the key agronomic factors that affect them. We measured the speed, smoothness and firmness of the surfaces as well as the soil moisture content, nutrient status and organic matter content. This built an accurate picture of the existing performance and condition of the greens to help guide the direction of future work. Our aim was, simply, to set up the surfaces so that they received the ball correctly, thereafter the ball rolling smoothly across the surface at the desired pace.

To be able to achieve this, we needed to understand what was actually going on. The results of the testing undertaken have been averaged for simplicity's sake in Table 1.

The speed readings of around 8'6" were at the very lowest end of our initial target range (8'6" to 9'0"). The smoothness rating of 6.9 was a visual score that describes ball roll exhibiting "chatter" and smoothness in roughly equal measure. Our target smoothness levels would be a rating of 7.5 and above, where smoothness begins dominating. 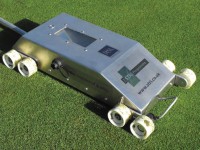 We now use the STRI Trueness MeterTM to measure smoothness to obtain a completely accurate reading. The firmness (hardness) results were obtained using the Clegg Impact Hammer and the results were also at the lower end of our target range. Our target firmness range for this golf club is between 80 and 100 gravities, regardless of the weather conditions. At these firmness levels, balls from well-struck shots taken from tight fairway lies impact, release, check and then stop. So, initially, all the playing qualities were at the lower end of our initial targets. For the greens to improve we needed to focus on developing all three areas. We needed a plan.

It was also important to understand the key agronomic issues that were impacting on the situation. Generally, the drainage wasn't regarded as being a major problem, but we certainly had issues to deal with in the soil profile. As we know, the key to all greenkeeping plans is to manage the soil profile correctly. Samples were taken from a number of the greens to review the pH and major nutrient status (no major issues) and the soil organic matter content (major issues). The results of the soil organic matter testing are outlined in Table 2.

The greens were too thatchy. The reason the greens retained moisture and became soft when wet (but firmer when dry) was largely due to the high levels of organic matter at the turf base, these needed reducing as a matter of priority. Such high levels of organic matter also increase the risk of disease and dry patch developing, which has an adverse impact on smoothness and consistency of the surfaces. The high organic matter levels were the biggest issue and we had to formulate a plan to reduce these levels throughout the soil profile. This can be achieved with the appropriate intensity of hollow tining and aeration, but we know that this won't be popular with the golfers. We needed to be careful with the plan!

We spent a great deal of time discussing the situation, making sure that everyone understood the key objectives and the measures necessary to achieve them. To summarise, the key recommendations at this time were to:

• Improve the speed of the greens with non-damaging cutting heights and introducing turf ironing during the main playing season.

• Improve the surface smoothness levels with more frequent in-season topdressing, by maintaining the turf health properly, with light brushing and verticutting to refine the sward texture, with the use of the plant growth regulator PrimoMaxx and by keeping damaging conditions such as pest infestations, disease attacks and the development of dry patch at bay.

• Improve the firmness levels by reducing the influence of the organic matter at the turf base, through intensive hollow tining and heavy topdressing in spring and summer, coupled with regular routine aeration.

This was all "fine and dandy", but we needed permission to proceed. The next stage was to arrange an evening presentation to the playing and committee members in January 2010 to outline and discuss the existing situation, and to talk about our targets and the way in which we were seeking to achieve them. 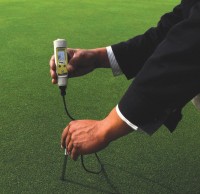 The meeting went well, and everyone who attended seemed to be positive about the year ahead and happy for us to undertake some disruptive hollow tining (because it was required to bring about improvement in the performance of the greens). It is generally true to say that people are quite reasonable if they understand what's going on. We also took the time to talk about all the greens playing qualities, and how our aim is to work on improving the desired levels of smoothness and firmness as well as the speed. They understood that a single focus on increasing green speed to make them better usually results in putting the turf under ever increasing pressure, possibly resulting in deterioration. They understood why the purchase of a turf iron was so important. We got permission to proceed, as long as we didn't create too much mess!

The next inspection was in March 2010. This visit was scheduled to review the success of the hollow tining and topdressing that had occurred a few weeks beforehand. We did promise to limit the level of disruption after all. The following is taken from our report at that time...

"The greens were in good shape at the time of inspection. The greenstaff had worked extremely hard to reduce the influence of the organic matter at the turf base without disrupting the playing qualities too much. In the face of difficult weather conditions during the autumn and winter, they have also worked well to prevent any major form of deterioration from taking place. We have set a good platform for the year ahead."

With a good foundation achieved, our aim was then to begin the process of preparing the surfaces as growth developed in the spring. The emphasis had changed away from disrupting the surfaces to perfecting them. This would involve regular topdressing, brushing, verticutting and rolling to prepare firm, smooth and well-paced surfaces on which to play.

The next set of measurements was taken in June 2010 after an extremely cold and dry spring (Table 3). Grass growth had been extremely slow to develop and surface preparations were just getting into full swing.

The greens weren't yet up to our desired level of performance and a few tweaks were required to improve the speed and smoothness levels. We immediately got the turf iron out and found that it took the pace over 9'0" and the smoothness rating to 7.5. Our report, from that time, not only reinforced our plan for the summer surface preparations, but also highlighted the importance of the upcoming hollow tining scheduled for August to reduce the level of organic matter at the turf base (to improve those firmness levels). We also purchased a moisture probe to help guide the need for optimum irrigation treatments.

One year on. By this time, the "summer" was now well behind us and the greens had been hollow tined and topdressed once again. We were greeted with raptures about the greens this year. The greenstaff had done a great job all year - as we knew they would. The results in Table 4 were obtained on a wet day in September and there was nothing silly going on (4mm mowing height).

The members have been delighted with the greens this year. The greenstaff have been allowed to get on with all the necessary work, and the surfaces have improved beyond recognition as a result. You will notice that the firmness readings are still not good and we have some way to go. Table 5 shows our progress with reducing the level of organic matter.

So, we still have a lot of work to do if we are to achieve our organic matter targets but, if we are allowed to hollow tine at the right time and complete the job correctly, then we stand a chance of making progress. If we hit these targets, the greens will get better and continue to perform longer in the year.

We are on our way. We are making progress because we all understand the situation properly and are focusing in the right areas. The greenstaff are achieving the desired results because they are being supported rather than constantly criticised and told what to do. Our simple way of assessing the situation, with a few key measurements, allows us to set meaningful targets and monitor progress to ensure we achieve them. We don't have to make empty promises anymore - the numbers speak for themselves.