5 Rammy cut up over pitch 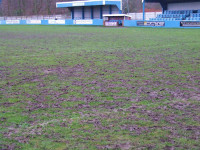 Ramsbottom United had a miserable festive season, losing both their home games by the same 2-1 scoreline, but it is the long-term damage to their pitch which has most angered boss Neil Hart.

Their game on Saturday against North West Counties Division One rivals Squires Gate went ahead despite a huge downpour just before the kick-off and when Hart approached the referee at half-time with conditions worsening, the official insisted that the game should continue.

Hart said: "We have gone from having one of the best playing surfaces in the league to now having the worst. It is ruined.
advertisement

"As far as I am concerned the game should never have been played.

"It was fit for play before the match, but so much rain fell during the warm-up that it quickly became unfit. I approached the referee at half-time and asked him to call the game off, because I thought somebody was going to get hurt, but he didn't want to know, unfortunately.

"When referees make these decisions they've got to take these things into account and when you've got a football club like ours that works as hard as it does and all the groundsman's work goes up in smoke in 90 minutes, it's hard to take."

The Squires Gate game followed on the heels of the 2-1 home defeat to Salford City on Boxing Day. But Hart's men now have the luxury of a weekend off due to a cup game which has affected Runcorn.