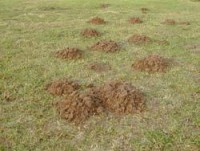 This year has seen an exceptionally drier spring and summer, temperatures have been higher than those of 2002 and 2001. Sunshine hours for January, March, and September have been the highest since 1961, and August saw just 17.4 mm of rain, the lowest recorded since 1961.

The warm and dry spring has meant that breeding seasons have started earlier and lasted longer. The recent change in weather as autumn arrived and going into the winter months has seen an explosion in rabbit, rat and mole populations in recent weeks.

There are an estimated 30 million rabbits in the UK, increasing by approximately 2% per year. A rabbit can eat £10 worth of crops per year costing British Agriculture approximately £44 - 50 million. In addition in the amenity sector considerable damage to sports turf is well known, especially links golf courses. The economic cost of rabbit damage to the amenity sector is unknown. As the population continues to increase so does the loss to the economy.

There are 60 million rats in the UK and this figure is said to be increasing by 20% annually. With the continuous economic pressure, a cut in spending by farmers, councils, water authorities on rodent control the situation is destined to exasperate. The National Rodent Survey 2002 showed an increase of rats reported by the public.

Damage from burrowing and undermining is not only a health and safety issue to livestock and the general public but also to the foundations of buildings, bridges and rail and road embankments.

With the withdrawal of the sale of sodium cyanide on the 31/12/03 for rabbit control and it's use by 31/12/04, what is available now to control these pests? The quickest and preferred method of universal control is by using Talunex® pellets via the Topex® applicator.

Talunex pellets contain Aluminium Phosphide. When the pellets are placed in the burrow or tunnel system they react rapidly with moisture and the produce phosphine gas, giving quick and humane control. The phosphine gas is rendered harmless within 48 hours. Talunex is supplied in flasks of 160 x 0.6g pellets. The flexible and economical application rates for rabbits, rats and moles assures that the correct amount of product is applied.

The use of the Luxan Talunex and Topex system offers an economic, effective control of rabbits, rats and moles coupled with excellent operator safety.